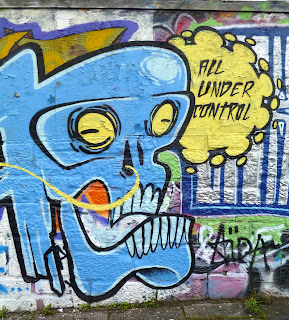 Paul Muldoon is indeed one of our greatest poets: challenging and playful, as he showed last Saturday evening. It was good to hear him read a full set of poems, especially the Wayside Shrine sequence from Maggot. He was relaxed and entertaining in the process, even having his son on stage to read a chorus to one poem, Lovely.

http://www.paulmuldoon.net/ to check him out. 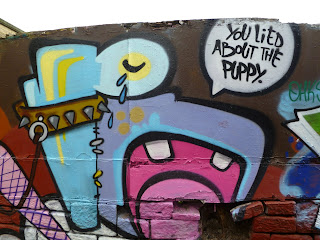 Another cracker from Lothian Road, Edinburgh. Note falling brick that hasn't moved.
Posted by Kate Noakes at 06:59 No comments:

You'd think that something directed by John Malkovich would be a bit, well, better really. This show had loads and loads of publicity - pictures of Malkovich handling out his own flyers on the Royal Mile in the Guardian, both he and Sands interviewed on the Culture Show, Sands on Radio 4, blah, blah. Certainly drew me to it.

Pinter's poems are the stars of the show, pithy, political and pleasingly personal. I knew some of them, but his love poems were a revelation.

I think my disappointment is that actors, even good ones like Sands coached by the poet themselves, as he was by Pinter before his death, just don't do poetry justice. Its music was lost in making meaning, over-rehearsed 'chat' between poems that lost all spontaneity, gesture, and actor-ly bowing. Poets just don't bow like that after their readings. Note to self - better go hear a poet reading their own or another's work.

Worth a try though if you not acquainted with Pinter's poems. It's on tour later in the year.
Posted by Kate Noakes at 06:53 No comments: 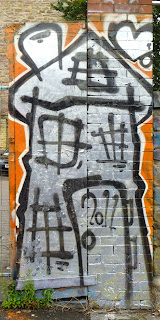 A really good one from Lothian Street, Edinburgh this time. I love the plants in the pavement, they seem so right.
Posted by Kate Noakes at 08:11 No comments:

I managed to get a ticket for Simon Callow's latest one man, or should that be one woman, show where he is a transvestite daughter (Pauline) to a more than unusually grumpy father on her usual Tuesday visit to him and the supermarket. It's an interesting piece translated from the French play that is currently taking Paris by storm (apparently) with a plot twist that I won't give away here. Callow is as one would expect is a brilliant, if unlikely trannie, resigned to being stared at every Tuesday in her 'home' town and not thanked or appreciated by her father, who is confused and ashamed by her in equal measure. But note to self not to sit too close to the stage again as it spoils the magic somewhat if you can see spittle flying. It's on at the Assembly Hall until the end of the month. 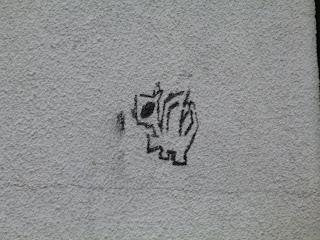 The Poetry Bookshop - Hay on Wye

What a joy it is to spend hours in a bookshop that sells nothing but poetry in the famous town that sells little else but books. I could've spent a lot of money there yesterday, but managed to restrain myself as my pocket demands. Check it out here:

There is a helpful on-line search and order system too for that first edition or must read you might be looking for and the owners are super-helpful and knowledgeable. Love it.
Posted by Kate Noakes at 09:43 No comments:

Labels: hay on wye, poetry, poetry bookshop
Newer Posts Older Posts Home
Subscribe to: Posts (Atom)
This website is very proud to be
archived by
the National Library of Wales