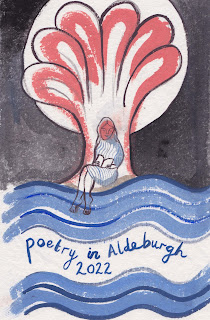 Roll up, roll up. I am hosting the open mic on Friday 4 November at 8.30pm. Plus reading new work. Looking forward to seeing you there.

A little way ahead, I know, but I am reading with the fabulous Fiona Larkin at the Bloomsbury Festival this autumn. Free but please book through eventbrite here: https://www.eventbrite.co.uk/e/fragile-filters-tickets-382886813767

The Museum of Innocence - Istanbul 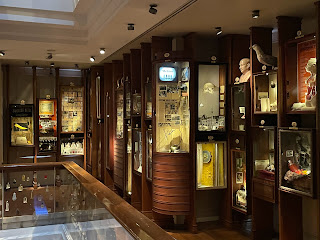 When Orhan Pamuk wrote his eponymous novel, which was published in 2008, he did not have in mind that the museum would actually exist. but having collected objects from the 1990s onwards for his fictional story, he did indeed find them a home in 2012.
The museum is housed in a 19th C building in the Cukurcama, Beyoglu district. It is as charming as it is fascinating. Listening to extracts from the novel as you tour around the display cases, all 83 of them, one for each chapter of the novel, and Kemal's 'recreated' bedroom is joyful. 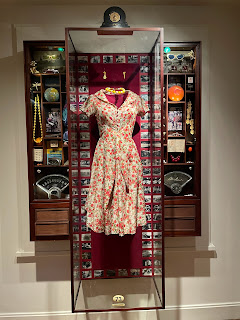 But the whole thing plays with your head. Here I am looking at relatively worthless things, including thousands of cigarette butts, that are only of significance because they relate to entirely fictional people. This must be the very definition of meta. Weirder still I bought a replica pair of silver earrings 'belonging' to Fusun, a non-existent woman.

Yet one of the posters on sale tells of an astonishing piece of real social history. It was apparently the practice in Turkey in the 1950s and 1960s to publish photographs in the newspaper of sexually transgressive women. They eyes are blacked out, but that wouldn't have stop them being recognised and publicly shamed. Women only, of course, not the men having affairs or sex before marriage. Shocking.

How did you know Michael? people ask each other as we exchange quiet pleasantries in the necessary shade of poplar and planes trees at Kensal Green cemetery. I knew Michael a little as I am friends with his son, Adam. He was always very kind to me when we met, encouraging the writing of poetry.

Others have written at length on Michael's achievements as a poet and father of the UK's counter-culture. I shall not repeat these tributes here, rather I want to capture something of the afternoon of both celebration and grief. Funerals are awful things - those in deep sorrow trying hard to maintain their poise is too much for society to expect, but everyone grieves in their own way, I suppose.

On then to a sun-baked plot at the west gate where Michael's simple wooden coffin lies waiting for us. The lady rabbi leads the graveside ceremony with prayer and psalms, some in English, some in Hebrew. Those who share Michael's faith join in. Others of us remain attentively silent and respectful. Others we can't see watch on the Zoom live-fed. Psalm 23 I know and can recite in its old version, this modern translation trips me up with the substitution of unexpected words. No matter.

There are kind words spoken and poems read. John Agard animates his poem to Michael magnificently. Niall McDevitt recalls tales of Michael and reads from his beloved Blake, quite rightly ignoring the heckles of 'enough', which ushured in an appropriate degree of chaos to the proceedings. Adam's eulogy is a beautifully written piece touching on each aspect of Michael's life as writer, poet, artist, poetry promoter, husband/partner, and father. It is emotional, jubilant and heart-touching. And, if it's not bad taste to say so for a eulogy, a tour de force.

Draped in one of Vanessa Vie's shawls and topped with one of Michael's colourful flat caps, the coffin is lowered deep into the London clay. The Kaddish is said. Vanessa carefully unwraps Michael's kazoo - the anglo-saxaphone - and plays. A greater expression of grief I have never heard. It is heart-stopping.

And then it is over. We talk a little amoung ourselves - I seek out the half-dozen of my friends who are there - and move out of the oppressive thirty-degree sun, back through the shaded walk, and out into the Harrow Road and the waiting world.

[No photos, I thought it poor form to take any] 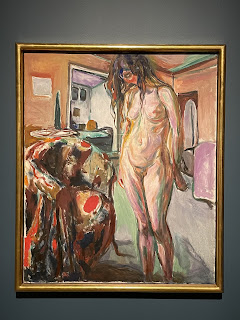 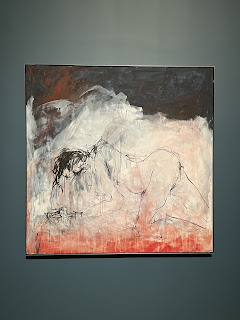 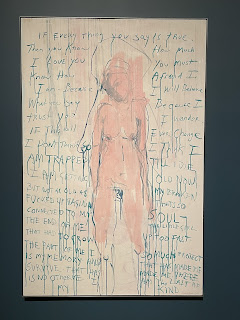 I was deeply moved. Hurry to book a place, as although it's been held over due to the pandemic closures - lucky that - it isn't on for long. You won't be disappointed.
Posted by Kate Noakes at 13:49 No comments: 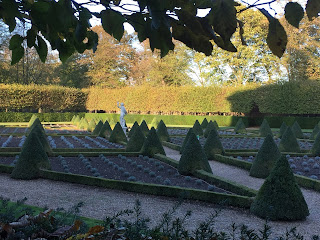 Precious little open, it is a lockdown after all, but you might be forgiven for thinking otherwise as all of west London is out and about walking the high streets of Chiswick and Richmond to buy take away coffee, promenade along the river, or look for deer in the park. Booking anywhere to walk, like Kew Gardens, takes the forethought I am seldom capable of, hence, there is no chance of going there on a weekend. Instead we opted for a stroll around the gardens at Ham House.

The box and yew parterre, interplanted with mounds of close clipped lavender and bordered by high yew hedges, is something out of A Draughtsman's Contract - very much the perfect winter garden (picture from slightly earlier in autumn last year though). I can only imagine its beauty enhanced by a frost. The kitchen garden is all but over, except for a row of splendid netted cabbages, and the ruby chard still shining on a pretty grey day.

Very much worth the booking - it's owned by the National Trust and all its gardens remain open in this winter pandemic season. Plus coffee and a cake are still possible outside the cafe. Dress warmly, of course, and take a further stroll along a very pretty stretch of the river. 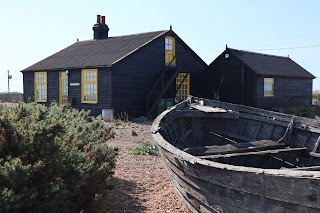 To complete all matters Jarman this month, we chose a hot Indian summer's day for a trip to Dungeness to visit his fabulous gravel garden (see earlier Garden Museum post). Whilst not exactly the best season as summer slips into autumn, there was enough in flower or just finished to have a good impression of how beautifully the shingle has been used to create shape and colour.

I've wanted to visit the garden for years, and more so now that this year the cottage has been saved for the nation, so this was a special treat on a perfect day. 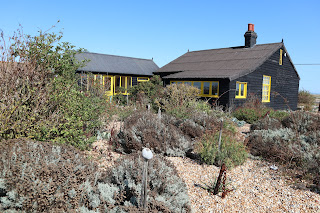 No entry to the cottage itself as the resident gardener makes their home there, but there is plenty to contemplate on a stroll around, in and amongst the plantings, found beach objects turned to sculpture and the like. I would have welcomed a convenient bench to sit and contemplate the scene for longer, but it was roped off. No matter. The eponymous view of the nuclear power station as not awful as people make out.

A place of austere beauty in the shadow of concrete brutalism, and you have to be able to see loveliness without much greenery in order to enjoy it. John Donne's poem (Busy old fool...) in large letters on the side of the cottage helps. 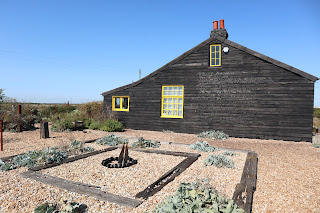 The beach extends some minutes' walk to a sharply shelving sea with views on this clearest of days of white cliffs near Folkestone and France in the far distance with cargo ships in between.

It was quiet: just a few garden and Jarman buffs and hardly a soul by the water. Not a place to swim, for that you need to head to the sandy and more traditional seaside delights of Camber Sands some two miles distant.