Find yourself the Everyman edition of Dylan's Collected Poems (ed. Davies and Maud), which collects the poems he chose to keep and publish in 1952. I am using the 1993 edition if you are trying to follow my page references. And Death Shall Have No Dominion (pg. 56) was Dylan's first published poem (at the tender age of 18), although he edited it heavily later in the version we now have.

It varies a well known bible verse from (St. Paul's Epistle to the) Romans 6:9 as the repeating phrase at the opening and closing of each of the three stanzas. This repetition and the insistent rhythm gives the poem its power as a meditation on immortality. If you're going to say something more than once, make it something worth hearing.

Most of the lines elaborating the theme are end-stopped, so it's interesting to focus on those that are not as they break that pattern and draw attention. There are three enjambed lines, one in each stanza:

'Dead men naked they shall be one
With the man in the wind and the west moon.'

'Under the windings of the sea
They lying long shall not die windily.'

'Where blew a flower may a flower no more
lift its head to the blows of rain.'

In each of these there is yet more repetition (man/man, winding/windily and flower, repeated even on the same line). Is this lazy writing? Perhaps the last one as the object is the same, but not the others I think as these add to the circular effect of the poem turning over its ideas on themselves.

As to windings/windily, this jars for me rather badly and if it were my poem, I'd have edited that out. The flower line on the other hand is interesting, or rather the blows of rain are a clever conjuring of the wind and its punches and is imagery extended in the next to lines: 'dead as nails' and 'hammer'. Dead as nails seems again to be Dylan invention, we know deaf as a post or thick as a board, but not this.

The mention of the unicorn myth and its abilities to dispel evil in stanza two is rather suspect and undermines the poem from within, even more so as this is the only line in which the syntax is tortured. I am inclined to smirk at this image, and that's me being unkind and reading it eighty years after it was written, but it does give the poem a risible register. This is a pity, but yet, classic Dylan imagery is at work here: moon, sea, stars, bones, all busily resisting death.

Poetry News and a wish 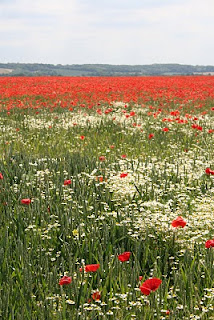 Next year sees an important anniversary.

It's hard for me to become in any way excited about the continuous bruhahah that is going to hit our screens, airwaves, and streets next year in celebration or commemoration of the outbreak of the First World War. It's going to be as bad in France as it is in the UK. All sorts of fun and games.

I refuse to join in, as a life long pacifist, my contribution is limited and predictably poetic. I am pleased to have been asked to contribute a poem the forthcoming Two Rivers Press anthology, The Arts of Peace. I also offer you this poem about my grandfather from my forthcoming book, I-spy and shanty  and wish you a peaceful new year:

ArmisticeTimed for his homecoming on Rhymney Bridge that November day, my grandfather flung his banded ribbons into clouds of smoke.Then, nothing - as if all his barbed-wire memories of lice, blood-stench, mud left him that second,
passed out skywards and were gone.
As a child on his knee when I leaned against
his tarry tweed and dared to ask - silence.
A boy with a metal detector, idling home
over the river one too-hot summer’s night,
is deafened by the screams of those bronze discs.
So I keep a vigil, a daily eBay search:
A.N. WWI medals - to date, no hits.

Pierre Huyghe at the Pompidou

Brandishing my newly acquired membership card, I've now visited this exhibition four times with three different guests. What a marvellous thing this is. I feel like I own the place. Would you like to pop into my art collection? It's just a ten minutes walk from my house. 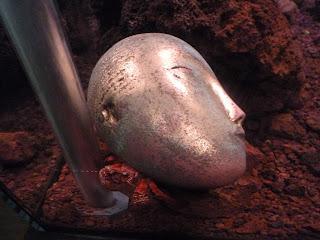 Pierre Huyghe is new to me, but then my knowledge of contemporary art if rather British-centric. The show is fifty works covering film, sculpture, painting, photographs, mixed media, sand, rain, snow, ice and live animals. Yes, you read that right: human, dog, fish, crabs and bees, variously walk and crawl around the galleries. It's a wild ride with films ranging from the risible to the awe inspiring. There is even a sound piece you can play with yourself if you like industrial noise. I love it. but the only down side is that it's so inviting to interact with the works, it's hard to control the urge not to touch everything.

Well worth repeated visits, I am enjoying it more each time, but don't expect the bees to be doing anything spectacular. It's cold and they are cuddled up on the honeycomb. Hurry if you want to dream away the holidays. You have until 6 January.
Posted by Kate Noakes at 03:14 No comments: 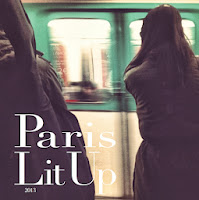 My next making workshop is on Sunday 5 January in the library at Shakespeare and Company as usual at 12h30h.

and NEW for 2014 starting on Saturday 11 January at the Cafe Apparement at 16h is a two hour weekly feedback workshop hosted by either Jason Francis Mc Gimsey, Paul Stephenson or me.

Do think about coming to one or other or both of these to kick start your writing year.

A timely work spotted this week in rue Denoyez, 20eme. It's rather wonderful and indeed Education is the power. 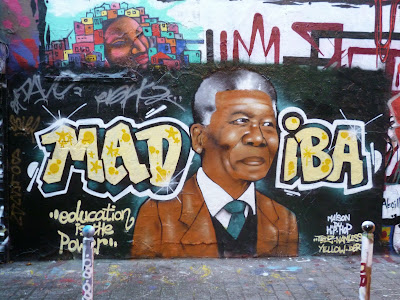 Surrealism and the Object at the Pompidou 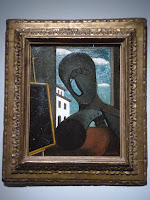 It must be the quietest block busting show in Paris. No queues. No block to bust. Hmm. I'm guessing surrealism might have had its day with the current art crowd. Despite the surprise that some of these things are nearly a hundred years' old, it was nice to see some favourites like Dali's Lobster Telephone, Magritte's cloud head and painting called this is a piece of cheese (Ceci est un Morceau de Fromage),  a couple of Chirico paintings and Man Ray's photographs (Woman as a hand mixer and the like). 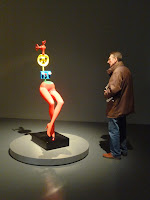 Interestingly arranged with selected objects from the various International Surrealist shows of the 1930s and 40s, the most striking rooms were those dedicated to Miro, and Giocametti, whose abstract sculptures are less well known than his tall thin figures. Although to be fair I am not a Miro fan, so I amused myself taking pictures of men looking at a woman. 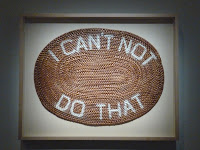 By far the most risible work is the collection of fish tank rocks, temples and bridges; a found piece that might have been best left in the pet shop. It was interesting to see some contemporary works too like Ed Rucha's simple placemat, but then I am a sucker for art with words. 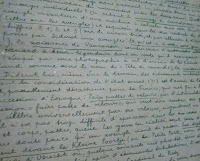 Revelation of the day - that Andre Breton had very neat handwriting.

Go if you must, but not with young kids, as there are rather too many phalluses. It's on until 3 March 2014, so plenty of time to choose other exhibitions to see.
Posted by Kate Noakes at 12:49 No comments:

A hugely enjoyable reading with other Eyewear poets at the Torriano Meeting House in Kentish Town on 8 December.

Thanks everyone for coming, especially those who came especially to hear, and indeed cheer, me. It was really heart warming to have such an enthusiastic reception for my work.

Make a resolution for the New Year - let poets know how much you enjoyed what you heard. It makes it all worthwhile. That and buying our books of course!
Posted by Kate Noakes at 12:47 No comments: