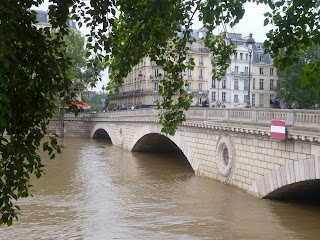 It's approaching summer in Paris. Of course, it's raining. It has, in fact, rained all week. Angry people have been kept indoors. When it stops raining and they're all been to see the flooded quais, as the Seine has burst its banks, they decide to do something else. In this case, demonstrate against, well, everything: the police, the state, the employment law changes, and anything else you care to think of. I inadvertently ran into the latest manifestation at the Canal St. Martin this afternoon. 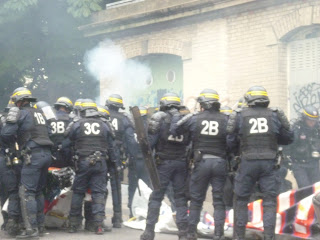 The first thing I heard of it was the clump of the police down the street where I was window shopping in the rather chi-chi boutiques and ateliers of hand made goods. I'd just finished my yoga class, so I was feeling rather Zen. Surprised, I backed into the nearest doorway as the riot police passed me. They looked rather hot and fed up. It's quite hard running in all that gear. There was much panting. I asked their leader what was going on. He made a typically French sound that meant something like, "yet more bullshit". 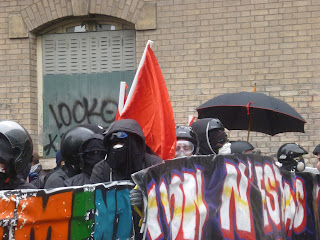 I followed the squad up onto the canal street. They had taken position across the street, riot shields and batons in place, and tear gas at the ready. The reserves were on the bridge over the canal. Facing them were the black clad protestors: anarchists, communists, others. Mostly they were young men ski and gas masked, but there were young women in the crowd and older men. They were well prepared. 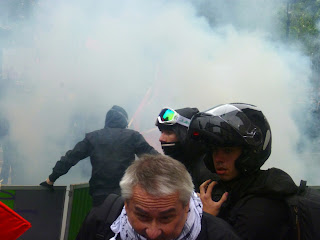 My attention was taken by a group kicking in a closed shop's window just yards from me. They easily broke the glass, kicked in more of it, entered the premises and started carrying out the contents. Not looting, just destroying. I saw a young woman smash a computer screen on the pavement, alongside her comrades busy breaking paving slabs into chunks of the right heft to hurl at the police. Rocks, cans, bottles, emergency flares, firecrackers and the like were raining down on the police as the protestors grew more and more defiant. They moved towards them for a face off, shouting slogans all the while. 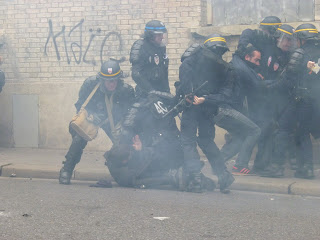 Then the police opened fire with tear gas rounds. Half a dozen. More. Deafening. And the gas itself is stinging to the eyes and throat. I retreated to the street below the canal. The police advanced. The protesters legged it. Not all of them got away. Two were wrestled to the ground by the police and arrested. More tear gas was fired. The protesters regrouped and the whole thing started again. 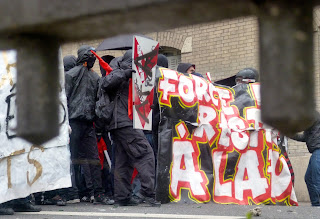 I wasn't entirely sure what the tactics of either side were: the protesters wanted to march and have a fight, the police were determined to stop them. No announcements to disperse were made, but then, I didn't stick around long enough to find out how it all ended. After about twenty minutes of photographing the scene, I became concerned I might be caught up in it. I was, after all, dressed in my usual black (leather jacket, legging, t-shirt) and I was wearing my rather clumpy biker boots. An easy confusion might have been made. 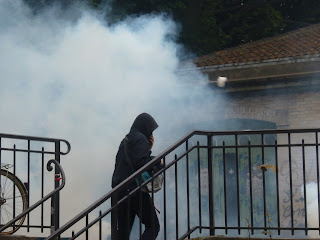 Just a few streets away, Saturday afternoon continued as normal: Parisians went on shopping, eating and drinking, peacefully protesting against something in Place de la Republique - this week the vegans calling for the closure of abattoirs - while the Caribbean carnival made its way down Boulevard Beaumarchais. Such different sides of the city, it's hard to reconcile them.
Posted by Kate Noakes at 12:05 No comments: 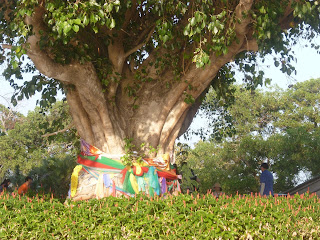 Birdsong – The last natural things I saw before boarding my plane to Bangkok was the small flock of sparrows which have made terminal 2F at Charles De Gaulle their home. The first natural thing I saw when arriving was a car park black bird with a yellow eye, probably some kind of starling. Birdsong differs by continent; tunes and calls are always a surprise. It is more melodious here than Africa; fluid water warbling with trills. The doves are softer than our wood pigeons. This is my early listening before the chorus is drowned out by traffic and building noise, the children in the school next door, and police whistles. These are imitated by one bird, another screeches over my head as if it is having an orgasm. Bickering birdsong now, as if a hundred market traders are outshouting each other to extol their wares, and orgasma bird is frantic to join them. 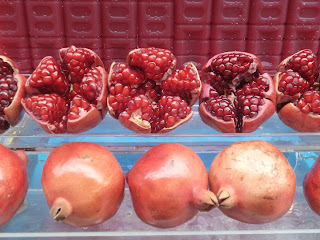 Ladyboys – A friend warned me that the sex industry was hard to avoid in Thailand. I wasn’t trying to in Bangkok, but I honestly saw nothing. Admittedly, I did not prowl the Khao San road at night. I spotted one ladyboy in a shopping centre and very beautiful he was too, as was my masseur(se) in Phuket. If this sounds like the writing of a nineteenth century anthropologist, it makes me uncomfortable that I find this subject noteworthy. Not of course, that transgenderism is necessarily anything to do with the sex industry. The massage studio was very clear with its unequivocal sign – No Sex. It saddened me that this was necessary, but obviously, it was.

Traffic jams – On my last evening in Bangkok I was held up in traffic on the motorway from the airport forever, but was actually no more than ten minutes. The King’s motorcade of a more than a dozen vehicles sped past. What is it with me and foreign royalty? It seems that whenever I go away I run into them. 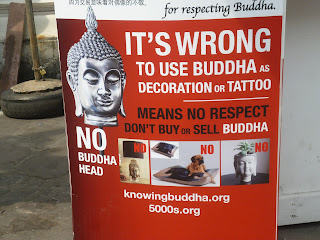 Signage:
Please take out your shoes (Wat In).

We do not like in this bar people involved with drugs.(Khao San road)

Be very careful swimming here. The current is very strong. You might be absorbed by the water drain. (Phuket)


I don’t know what I am looking at (American tourist)
Posted by Kate Noakes at 07:58 No comments:

Labels: thailand
Newer Posts Older Posts Home
Subscribe to: Posts (Atom)
This website is very proud to be
archived by
the National Library of Wales