Sadly I missed this landmark event yesterday, being stuck on a train. So very disappointing as I am told it was a stunning poetry show and a very moving occassion. Still at least I can donate my refunded train fare to the cause. I hope it was recorded so that I can hear what I missed at some point.
Posted by Kate Noakes at 05:04 No comments: 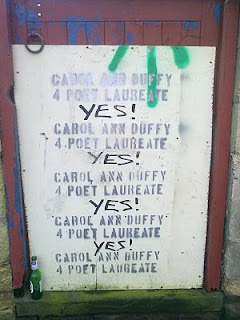 Literary concerns, spotted in Clifton, Bristol. When did poetry last attract such passion I wonder?
Posted by Kate Noakes at 11:05 No comments:

Fantastic news for a great poet. I had the pleasure of being 'workshopped' by Philip during my MPhil course. He is a generous critic and a thoughtful reader, and I can recommend The Water Table to you. Many congratulations!
Posted by Kate Noakes at 10:35 No comments:

Sting - If on a winter's night

Was one of my Christmas presents to myself (it's like that sometimes!). Some of the songs are more lovely than others to my ear, but I am very interested in the interpretation and setting of poems by Robert Louis Stephenson (Christmas at Sea) and to hear Vaughan Williams' music for William Blake's Cradle Song. Check it out.
Posted by Kate Noakes at 06:21 No comments:

This week the Post Office have issued a limited edition of stamps of 'classic' album covers - classic meaning presumably the artwork, not the music. How else does one account for the inclusion of Tubular Bells (Mike Oldfield) and Division Bell (Pink Floyd)?

My order for The Clash and New Order, snow willing, are winging there way to me. Hurray for that, but I fret that this is the seal of establishment approval. Pun intended!
Posted by Kate Noakes at 05:27 No comments:

'But for now I am a willing prisoner in this house,
a sympathizer with the anarchic cause of snow.'


So says Billy Collins in 'Snow Day', where he has his dog 'porpoise' through the snow, an accurate image. I am in complete agreement with Billy here this week and have the same 'mind of winter' that Wallace Stephens explains in 'The Snow Man'.

Robert Frost's 'A Dust of Snow' is eight short lines of excellence for a day such as today. I commend it to you, along with Emily Dickinson's 'The snow that never drifts' and which is 'fragrant'. I wonder what snow smells of? Metamorphorically perhaps it smells of all things clean and new. But this is not so for everyone.

The emptiness of the world in the snow is described in Louise Gluck's stark poem 'Snow', on the loss of childhood innocence. Or perhaps one might find uses for Yeats' image of things being 'as mad as the mist and snow' (from the poem with this title). Or Larkin's 'wretched width of cold' ('First sight').

'The snow is melting
and the village is flooded
with children.' (Issa, trans. Hass)

Ah, if only, but I suspect we have many more days yet to play in the snow and let is give us poems (cf Ted Hughes' 'The thought-fox').

to the all new Boomslang Poetry blog. I am planning to post items here of interest to poets, other writers and random culture vultures.

This week's news is that I have a poem, Snow light, in The Mirror, selected by Carol Ann Duffy for her Poetry Corner on the women's page. It will be in either Thursday or Friday's edition.
Posted by Kate Noakes at 09:09 2 comments: