Every year on Hallowe'en when almost everyone else is either busy carving pumpkins, or blithely ignoring the horror fest, a small band of Keats devotees participates in something rather wonderful.

Until this year I was entirely ignorant of Keats' birthday wreath laying ceremony in Westminster Abbey. And it was only by virtue of a small innocuous post on Facebook that I not only found out about it, but ended up being one of the participating readers. I wrote in praise of the new Hockney window, which I was keen to see but too mean to spend the twenty pound entrance fee on. Judith Palmer, director of the Poetry Society, came to my rescue by offering to get me in for free, and also inviting me to read in the service. 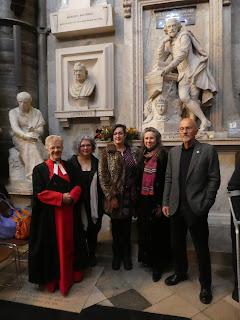 Presided over by the charming and welcoming Rev. Jane Sinclair, who is one of the Canons in Residence at Westminster, we gathered in Poet's corner under the Keats memorial, which with Shelley's is high up above Shakespeare's. After a few prayers for the life of Keats, 223 yesterday, and the beauty of his poetry, I read the sonnet On the Grasshopper and the Cricket, also known by its first line 'The poetry of earth is never dead'. It was an ecological choice chiming with the climate change protest going on outside the Abbey on Parliament Square, but also appropriate for the change of seasons, now that we have moved from a prolonged period of very warm weather into the cold of winter.

Here it is in full:


The Poetry of earth is never dead:
When all the birds are faint with the hot sun,
And hide in cooling trees, a voice will run
From hedge to hedge about the new-mown mead;
That is the Grasshopper’s—he takes the lead
In summer luxury,—he has never done
With his delights; for when tired out with fun
He rests at ease beneath some pleasant weed.
The poetry of earth is ceasing never:
On a lone winter evening, when the frost
Has wrought a silence, from the stove there shrills
The Cricket’s song, in warmth increasing ever,
And seems to one in drowsiness half lost,
The Grasshopper’s among some grassy hills.

I especially love the idea of the grasshopper as taking 'the lead/in summer luxury'. Lead on.

Katy Evans-Bush read Keats' letter of February 1818 to his friend Reynolds. It is one of the more important of Keats' correspondence as it explains in part his view of poetry:

'We hate poetry that has a palpable design upon us, and, if we do not agree, seems to put its hand into its breeches pocket. Poetry should be great and unobtrusive, a thing which enters into one's soul, and does not startle it or amaze it with itself - but with its subject.'

No self-conscious experimental showing off for Keats then.

Chris Hardy read another sonnet: 'When I have fears I may cease to be', which is so deeply affecting as Keats frets about dying before he has written much of what he wants to. Finally Mab Jones offered Keats' entreaty to his siblings: 'Be as happy as you can. Think of me, and for my sake be cheerful'.  Not a bad mantra to live one's life by. 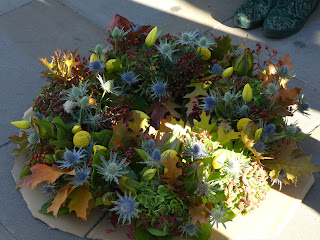 The most beautiful wreath was laid. It was a perfectly designed with a subtle colour palette. To Autumn made flesh, if you will. I left the short service feeling honoured to have been a part of it and ever so slightly shivery.

Of course, once in the Abbey, it was time for a little wander. Dwelling in Poets corner, we named checked our favourites of the 100 or so poets buried or memorialised there. I commented on the great lack of women's names aside from the obvious - Austen, Gaskell, Barrett-Browning, Brontes. As usual there is much to do to redress this imbalance as there are only nine women, aside from a couple of actresses and opera singers. Where are the memorials to Mary Wollstonecraft, Mary Shelley, Christina Rossetti, Virginia Woolf, Stevie Smith, Doris Lessing, and Iris Murdoch, to name but a worthy few? I feel a campaign coming on.

As to the Hockney window, which was after all the point of this whole escapade, it is a dramatic and exciting addition to the Abbey. Hockney has imported an abstraction of the Yorkshire countryside in Spring - all hawthorn - to bring much cheer and dazzle to the nation's church. Chapeau to the Dean for his vision.
Posted by Kate Noakes at 04:48