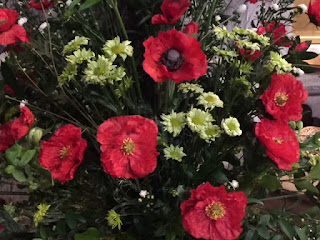 The flower arrangers are at their art - red silk poppies amongst the white crysanths - for this Sunday's big one, the centenary of the end of WWI. Perspex cut outs of the heads and shoulders and upper bodies of the thirteen lost men of this tiny parish - the smallest city in the country - have been arranged on the pews in the church and its chapels. They are barely visible reminders of the missing.

Outside in the grey, the rain and wind have restarted their watery howl. Inside, grey and white striped marble reminds me of the pebbles I collected on the beach this morning during a lull in the wave of storms lashing the West this weekend. It is generally miserable, but the weather is all I have to worry about.

When we search out the tombs of mediaeval knights lying in their armoured splendour - all chainmail, helmets and swords - we forget that they were combatants, who fought at close quarters in an endless series of wars against the French, or even further away in the Holy Land, on one Crusade or another. And it's not easy to remember that even from the depths of history, there's nothing glorious about war.

I'm glad I didn't have sons and the dilemmas of toy swords and guns. My girls never wanted to beat the living bejesus out of anything. I confess I did buy my nephews light up broadswords one Christmas, which were judged, predictably, to be the best present. But I can't know how a mother might feel seeing her sons march off to conflict. I can imagine though that conscription could never work again. Despite the present nationalism stirred up by Brexit, I just can't see any of the young men I know agreeing to put their lives at risk for vainglorious nonsense decided by politicians. I suspect our prisons would overflow with conscientious objectors. 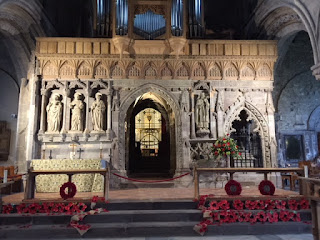 Perhaps our sons would not be needed in great numbers, though any number is too many, as we seem to be very good at remote control electronic warfare. Bombs dropped by drones. The army base near here specialises in such and can operate in any part of the world. It's the stuff of science fiction, except that it's not fiction. The soldiers were in the Cathedral yesterday, practicing their part in Sunday's service, along with the Guides and Brownies. I never liked the quasi-military element of Guides - the parades and saluting. It seemed silly to me, even aged twelve.

I can appreciate the Armed Forces wanting to pay tribute to their fallen comrades from however long ago, but why this involves the church, I am unsure, just as I puzzle why military banners hang in our churches. Of course, there is a role for the priesthood in providing comfort to anyone, but the mix sometimes comes close to an approval of war. And it goes back centuries. I stroll past the supposed tomb of Gerald of Wales, a Bishop of St David's, and remember how he travelled the country drumming up recruits to 'take the cross', which meant nothing religious, euphemism as it was for joining the Crusades - the holy war.

But then again, I recall Thatcher's service to celebrate victory in the Falklands War and, if I remember correctly, how she was reminded from the pulpit about the path of peace. That seems to me the role of faith. But peace will never be out broken as we are always fighting somewhere in the world and, if not, then arming others to do so.  As long as we have a massive defence industry, how can things be otherwise? I'd like to hear a priest rail against the immorality of BAE Systems and its ilk on Sunday. That would be fitting memorial to futile sacrifice.
Posted by Kate Noakes at 10:06