Hidden Gardens in the Marais 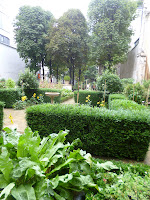 Not exactly a secret, as they are maintained by the Marie, but very close together at 35 rue Francs Bourgeois and 21 rue des Blancs Manteaux in the 3eme are two lovely little gardens, hidden from the street behind buildings. You can easily miss them, but they are certainly worth seeking out if you are in search of a quite spot to contemplate, write or picnic in. The latter is only open on the weekend though and don't let the gate put you off, it is unlocked. Perhaps not best on a rainy day, but I did have them to myself this afternoon.
Posted by Kate Noakes at 07:42 No comments:

Guns and preparedness, or how Cubans really live V

All Cuban men have to undertake two years (it used to be three) of National Service in the armed forces. For women, it’s voluntary for a year, but if you do it and otherwise qualify for University, you will pass straight to college. If not, or if you are a man, then going to University is a matter of the number of doctors, teachers, etc. that the government decides it needs to train every year.

Cuban children are encouraged to learn how to fire a rifle too. There are lots of cool looking gun shops to make this seem an attractive past-time.

When I asked why, the answer was a very clear one – we have to be ready to fight a war against America at a moment’s notice. Fifty two years after the Bay of Pigs, you have to wonder.
Posted by Kate Noakes at 07:51 No comments:

Crimes against the government, which is how most law breaking is described, are constantly being checked for; things like transporting large quantities of food, as the assumption is it is to be sold. Cubans can’t move between provinces without their buses or cars being halted at checkpoints on the highway by the police.

Imagine being subjected to that level of stop and search at home. Tourist cars on the other hand sail blightly by.

Who do you work for? Or how Cubans really live III

The answer is the government, not as you might imagine, the community.

No-one I met described the work that they do as for the benefit of everyone. The notion of the commons seems to be absent from the vocabulary in Cuba. There is simply the separately thought of entity that runs and controls everything from the price of tobacco to how much sugar cane to grow to pay China. This applies whether you are a farmer working with a co-operative selling ninety per cent of your produce to the government, or a travel guide employed by the state tourist company.

Unless you are one of the recent breed of small entrepreneurs (see part II below), you work for the man. Not so very different from home then, except the matter of degree and the fact that he’s called Raul.
Posted by Kate Noakes at 12:36 No comments:

The first Paris Lit Up Writing Workshop of the new year will be on 1 September at 12h30 in the library at Shakespeare and Company. Come and join me for a two hour session creating new ideas and work for poems, flash fiction and short prose pieces.

The theme is Taking Another Word for a Walk, Challenge yourself to see just how much you can do with one little word. I dare you!

Donation 10 euros to Paris Lit Up's much needed funds. See you there then.
Posted by Kate Noakes at 12:24 No comments:

Why can’t I buy that? or how Cubans really live II

If you browse the ordinary shops where Cubans make their purchases, there is not a great quantity of items on offer, or very much choice. I needed a toothbrush, being a numpty I forgot to pack one, and so the very first place I had to seek out was a pharmacy. Of course, as a visitor with the right kind of money in my pocket, this was an easy task.

The nearest pharmacy was an enormous old fashioned emporium with beautiful drug jars ranged on its dark wooden shelves, gleaming under crystal chandeliers; a museum in action, even if it had very little stock.  My communist toothbrush, as I have been calling it ever since, having the abrasiveness of a Brillo pad, has proved surprisingly effective. Three weeks’ later and I have been complimented on my whiter teeth. It seems decades of tea, coffee and red wine stains have been expunged by my new red friend. Viva la revolucion!

If only things were as simple for Cubans, where it has been just two or three years (the time varies depending on who you talk to) since it has been permissible to buy a car or buy and sell a house; and just four years to run one’s own business. Every small entrepreneur, running a restaurant (paladar) or renting a room, who we talked to thought this was the best thing since sliced bread. I remember having similar conversations with friends in Prague very soon after the Velvet Revolution.

Things have got to change, they say. After all you can’t tell a young person, who has some knowledge of the world via the, however limited, internet, why they can’t buy/have/do something these days. If you do, they’ll try to high tail it out of town sooner than you can say struggle. And that’s what I am told most people would do given the opportunity. Looks like the continual revolution is in its death throes. Raul Castro stands down as president in eight years’ time, then it’s game over for the last socialist experiment is my betting.

Ration Books, or how Cubans really live I

There are two currencies in Cuba – national money, which is how Cubans are paid and with which they can buy just the very essentials, like basic food; and convertible pesos, which they need to buy everything else like decent food, telephone bills, cars and, frankly, anything worth having that makes life bearable. How do you get convertible pesos? You may well ask.

Everyone wants them and will do almost anything to get them from begging, to posing in costume for you to take your photograph with them, to playing music with varying degrees of skill for tips, dressing as living sculptures, selling all manner of consumables on the street and providing good service – that includes everyone from the chamber maid to the hotel manager; all are trying to earn a little extra. And what they do get, I am told they most likely spend on food. This is no surprise, if you poke your head into one of the local distribution centres.

All Cubans have a monthly ration book which enables them to buy staple foods at subsidised prices. These are rice, beans, sugar and coffee, and a few other things like oil and soap. They are sold in bulk, a whole month’s worth at a time, so you have to be strong to haul this lot home. The centres are Spartan in the extreme. Ask your parents or grandparents about war time rationing and you’ll have some idea of what this means.

Ask a Cuban and they’ll tell you things are good now compared to the Special Period between 1989 and 1994 when the disintegration of Soviet Union and the withdrawal of support to Cuba put the country on the brink of a humanitarian crisis. Cubans ate a lot of rice and beans, started to suffer from malnutrition, and when the soap ran out, which it did, washed themselves with such appalling detergents that they developed horrible skin conditions. Not good.

No wonder the borders were opened in response for a second wave of emigration. Anyone with family in the US or elsewhere was whisked away by boat; those without risked life and limb on flimsy rafts to get away. Remember those news stories about Cubans drowning in the Gulf of Mexico?

It’s astonishing then that in the twenty intervening years, and despite the organic huerta (community garden) movement, Cuba is still not self-sufficient in food. There is plenty of fertile land to be cultivated and a year round growing climate. Yet, even having natural resources like oil and gas, there is not enough diesel for farmers to plough the land. This doesn’t make much sense and leaves Cuba still at the mercy of its trading partners. Thus, sadly, the wheel turns.
Posted by Kate Noakes at 09:15 No comments:

Amongst other things, I drank rather a lot of rum, more rum in fact than I have perhaps drunk in the last thirty years. I have now acquired something of a taste for el ron. Perhaps reacquired is more accurate, as I seem to recall our poison of choice was rum and coke when I was a teenager, or Cuba Libre, made with the ubiquitous Havana Club, as it is more romantically called these days. Just to clarify, Bacardi now comes from the Dominican Republic, as one glance at its glass-shattered, yet still beautiful, Art Deco former office building in central Havana will attest.

But enough history, on with the awards: the good, bad and ugly of Cuban Mojito making based on my extensive research.

Starting with the worst Mojito in Cuba – unequivocally this honour goes to La Bodeguita del Medio in Havana Vieja for the singular lack of attention to details like sugar. Without doubt this was the sourest and most small-measured meanie of cocktail in Cuba. The bar is Hemingway’s former watering hole and is a hideous tourist trap (so is El Floridita where he drank Daiquiris – you have been warned) and one can only assume that as a result they simply don’t give a damn. That’ll be something like six of your convertible pesos por favor (about five euros – happy hour price in Paris) and here’s some shit we mixed earlier.

Luckily it’s all uphill from here. The best Mojito in Cuba prize goes to Shakey Shakey Wakey Wakey in Trinidad for the perfect and caringly made mixture of sugar, lemon, expertly bashed mint, ice, rum, fizzy water and Angostura bitters, served by the nicest man in Cuba. We loved him and his super paladar (privately run restaurant to you). Go there. Drink lots. It’s cheap too (two pesos fifty – about two euros).

But wait, there’s more – the strongest Mojito in Cuba is made on the idyllic white sand beaches of Cayo Leviso, where at three pesos a pop you are pretty much guaranteed at least a double that is so strong you have to top up the water ‘because you are on your holidays.’  Marvellous.
Posted by Kate Noakes at 07:49 No comments: