After my last post I have clearly had to leave town, for the sun mainly. Nothing gives me greater pleasure than  to read a weather forecast that says Barcelona 22 degrees, Paris 6. Day one of my Easter break in the Catalan capital and we head to the Picasso Museum.

First tip - buy a six museum pass for a mere 30 euros and skip all the queues - perfect. No standing around like a sheep.

The museum is the largest collection of Picasso's work, but if you are expecting weeping women, lots of bull-fighting and sculpture, you will be disappointed.

What you will find is a surprising amount of early work of absolute brilliance: his early portraits of his family and friends are wonderful, and the theatre scenes from turn of the (twentieth) century Paris are lovely.

The painting that spoke most to me this time was Waiting (Margot), probably because she looks as worn out and in need of a holiday as me.

His obsessive work in preparation for Las Meninas is something to see - pity there is no reproduction of the Velasquez to make the comparison, but that's what iphones are for I suppose, as everyone was calling it up on wikipedia.

The museum buildings are actually worth visiting on their own- gorgeous noble houses with courtyards, impressive cellars and intricate carved stone work.

The current special exhibition is of Picasso's ceramics - an  reinvention of the Greek.

Go early to avoid the hoards and try not to spend too much in the gift shop.
Posted by Kate Noakes at 08:47 No comments: 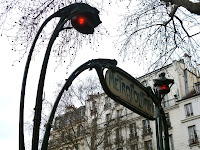 I've been living in France for 18 months now and until last night I hadn't experienced the legendary rudeness of French waiters and waitresses. Not once. I thought it was an urban myth, but it's not. It's alive and well and living near the Place des Vosges.

The story goes something like this - out eating Mexican with a couple of girl friends, we decide we are still hungry and head off from the Cantina, which doesn't have a single pudding on its menu, to somewhere else for a dessert to die for. We alight on a place I go to often and where I have eaten crème brulee in the middle of the afternoon with a cup of coffee. We decide on the cafe gourmand each - which if you have never had it is a heavenly sampler of different desserts - crème brulee, chocolate mousse, fruit tarte with crème anglaise and a cup of espresso. Perfect.

When we order these, the most expensive desserts on the menu by the way, the waitress tuts at us because we do not want to eat (although clearly we do). It is gone ten o'clock and the restaurant is not busy. She then checks with the maître that we can indeed order such and returns in a major strop to remove the starched white cloths from the table with a flourish and leaving the rather unappealing table top beneath for us to enjoy.

Pudding takes ages to come. It is delicious, but not enough to merit any kind of tip for the balchiest waitress in Paris. Silly girl, what exactly was her problem?

This month's close read takes on Plath's poem The Disquieting Muses*. If you are interested in making art from art, as Plath does here, come to my next Paris Lit Up writing workshop on 7 April at 12h30 in the library at Shakespeare and Company. If you can't wait until then, there is a writing prompt for you to try at the end of this post.

Plath uses the idea of and rewrites the Sleeping Beauty fairytale in this poem addressed to her mother. Instead of asking why the wicked fairy was not invited to her christening she wants to know which family member was not invited and chose to send 'three ladies in her stead/with heads like darning needles'. The second stanza expands this imagery into other children's stories and fairytales with its reference to Hanzel and Gretel, to ask whether her mother's words from these sources dispelled the ladies 'nodding at night around my bed'.

The ladies represent the ultimate childhood nightmare for Plath. As she says idiomatically in the third stanza, they even broke her father's study window panes where a hurricane did not and in the fourth and fifth stanza prevented her from enjoying the delights of childhood like dancing, 'singing the glowworm song' and playing the piano. The nightmare continues into adulthood as the muses are the travelling companions she must face as they 'stand their vigil in gowns of stone/Faces as blank as the day I was born/Their shadows long in the setting sun'.

Plath continues to lay the finger of blame for her state of mind, and here we might read-in some biography and her depressive episodes, on her mother. The repetition of the words mother, mother lays emphasis on this at the opening of the poem, in the final stanza and at several places in between.

The poem ends with a puzzle that she will not betray the company of the muses. What does this mean? That they are far from nightmare and by now familiar comfort, artistic guides even, or that to oppose her mother she must alley herself with what terrifies herself most? Perhaps both. This poem is often read as the young woman wrestling older female figures who are trying to smother her**, but I think this is a simplifcation. Of course, all of this is without even knowing that Plath had in mind a particular painting, executed during World War I by Italian metaphysical painter Giorgio di Chirico, when she wrote this. Once you see the painting (left), the description of the figures and their precise position around the crib is apparent, and somehow for me less nightmarish. Unfortunately, now you know this, you can never read the poem in isolation, as you are almost bound to want to navigate between the two to see which elements Plath used and which she ignored.

That is an added dimension to the game of ekphrasis and specifically what is crucial for the writer, I now think, is to be skilled enough to make a completely self-contained poem that does not need to be informed by knowledge of its source. Often I find it tedious to have such imposed on me as reader, as it requires work on my part to go elsewhere (and I am inherently lazy), instead of just enjoying the poem, although guilty as charged on previous occasions!

And now for the writing...Find yourself a scary painting. There are plenty to choose from (Bosch, Fuseli, Munch come readily to mind). Use its images as description for something scary from your childhood. It does not have to be a gothic nightmare, just something that frightened you (and perhaps still does). Just remember to cut it loose from its moorings and don't make the piece dependent on knowing the painting, avoid references to the actual artist, although you might want to throw the reader a clue, as Plath does, in the title or in one of the lines. Have fun. Boo!

My old alma mater is running a Poetry Festival between 5 and 9 June this year at which I will be running a workshop. In advance, there is a special exhibition of poetry books in Reading University library, wherein you will find The Wall Menders - lovely! Go visit if you are in the vicinity.
Posted by Kate Noakes at 08:55 No comments: