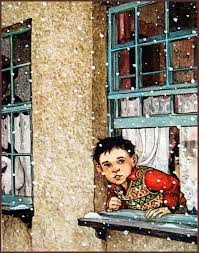 I spent the early part of the year re-reading and thinking about Dylan Thomas. Things trailed off the nearer we came to his centenary in October, I don't know why. I was sort-of-not-quite-then-not going to be involved in a production of Under Milk Wood, so perhaps I went into a bit of a sulk, or perhaps I just didn't want to compete with the rest of the media for attention, who after all reads my little blog? But it's Christmas time and, of course, how can we forget -  Mrs Prothero and the Firemen.

Dylan's A Child's Christmas in Wales is still as popular as ever, lovely new editions are published regularly, variously illustrated for both children and adult consumption. Mine is somewhere, but not here in Paris, so this post is from memory.

If you have never read it (or failed to hear Cerys Matthews reading it on the radio on Christmas Eve), do. It's not as corny as you might think and is packed with Dylan wickedness. It's heart warming and will make you laugh.

When I was a child I always fancied being an arctic explorer from Mumbles, or one of the boys snowballing cats in the back garden, putting rocks in the snowballs first (I hate cats, but that's another post), or Mrs Prothero's sister entirely un-phased by the fire, who descends the stairs and asks the firemen if they would like something to read.

Now there's a woman with the right priorities. Happy Christmas/New Year/Whatever. Opens new book and starts.
Posted by Kate Noakes at 03:35 No comments:

A Hammam on Boxing day 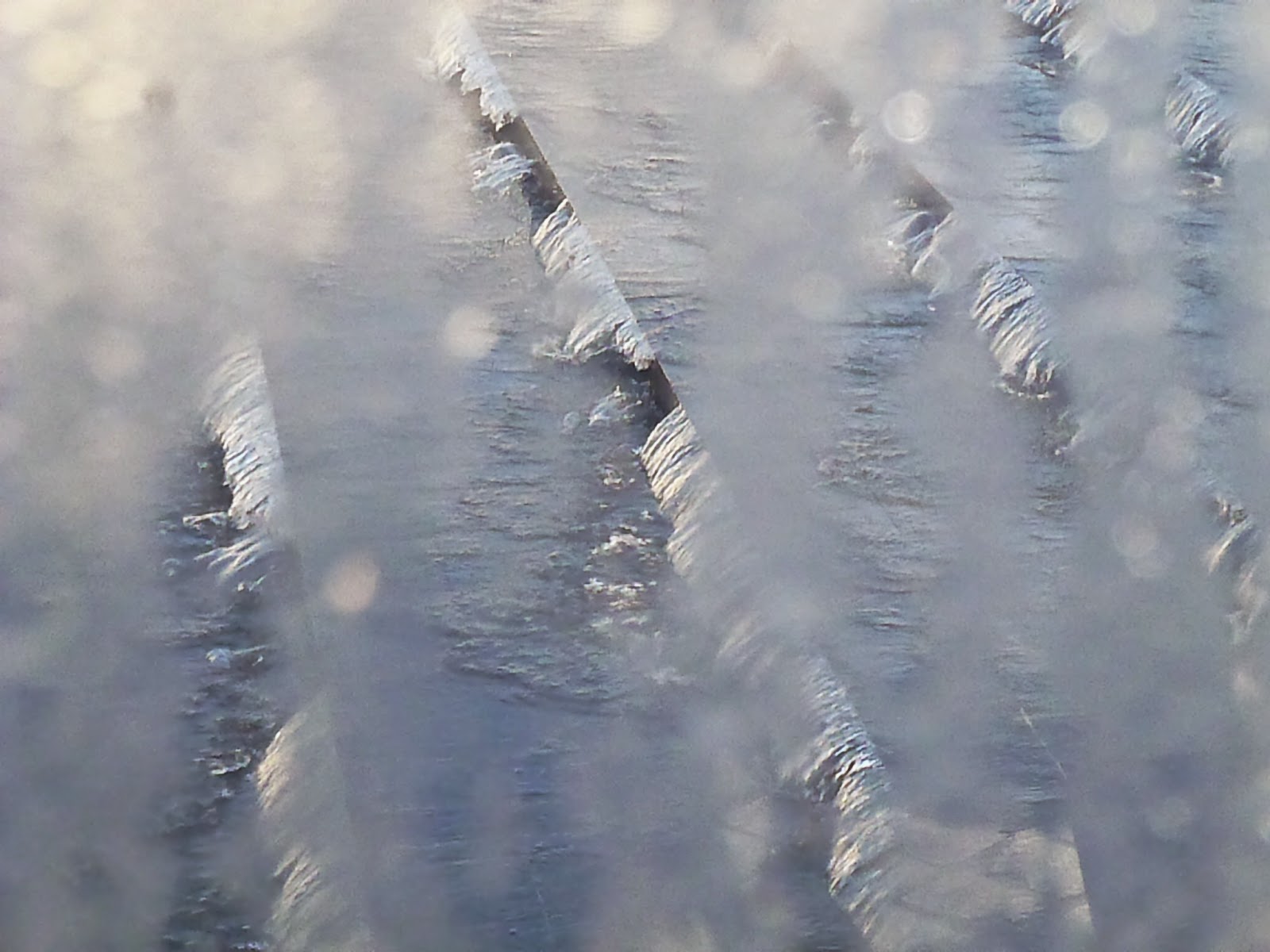 No better way to detox after a feast, than a trip to a hammam. Sitting in the steam, being scrubbed clean and oiled is heavenly.

I visited O-Kari, which is hidden in a tiny street in the 2eme, so hidden I walked passed it twice before spotting the brass plaque. It's not exactly cheap, but for a treat, well worth it. It's completely different to the mosque, being small and offers much closer personal attention.

I left with the smooth skin of a babe and a clear head. Highly recommended. Go with a friend of course, it's a social outing.
Posted by Kate Noakes at 03:06 No comments:

Inside at the Palais de Tokyo 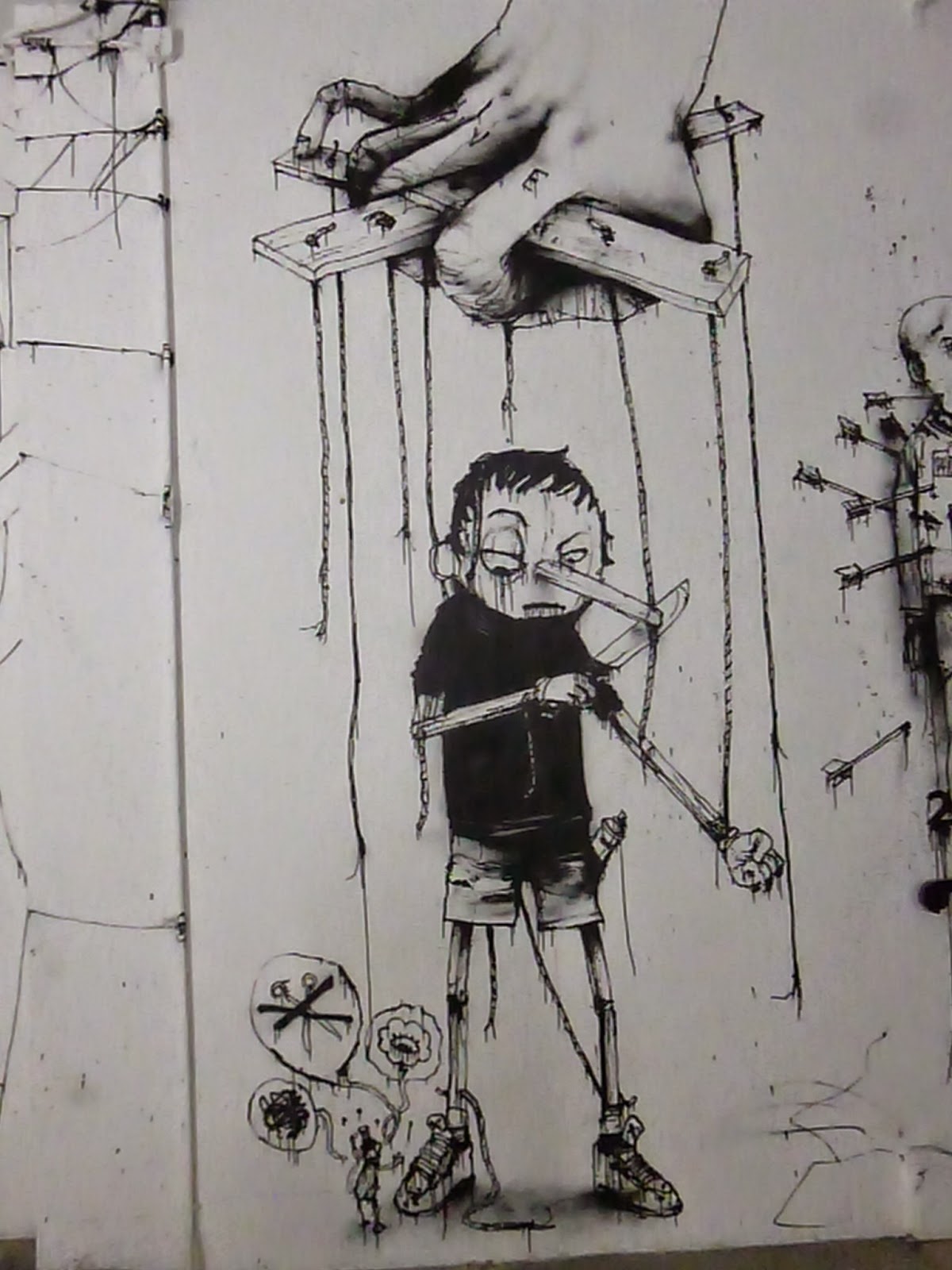 The Palais de Toyko is huge and I mean enormous. It must be the biggest space for contemporary art in the city, so Thursday night and with my daughter in tow I finally made it there to Inside, which is a group show of wonderful work. 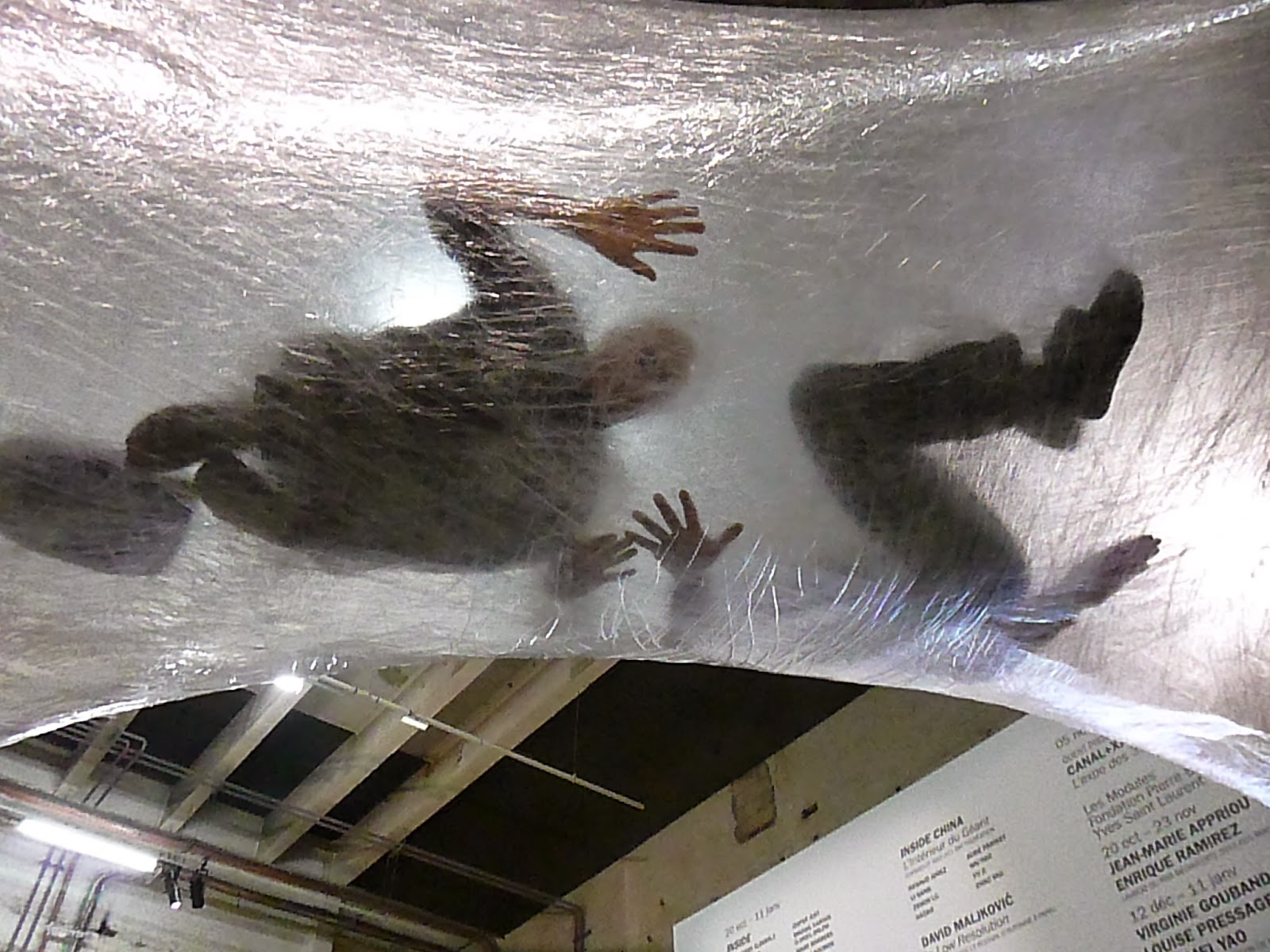 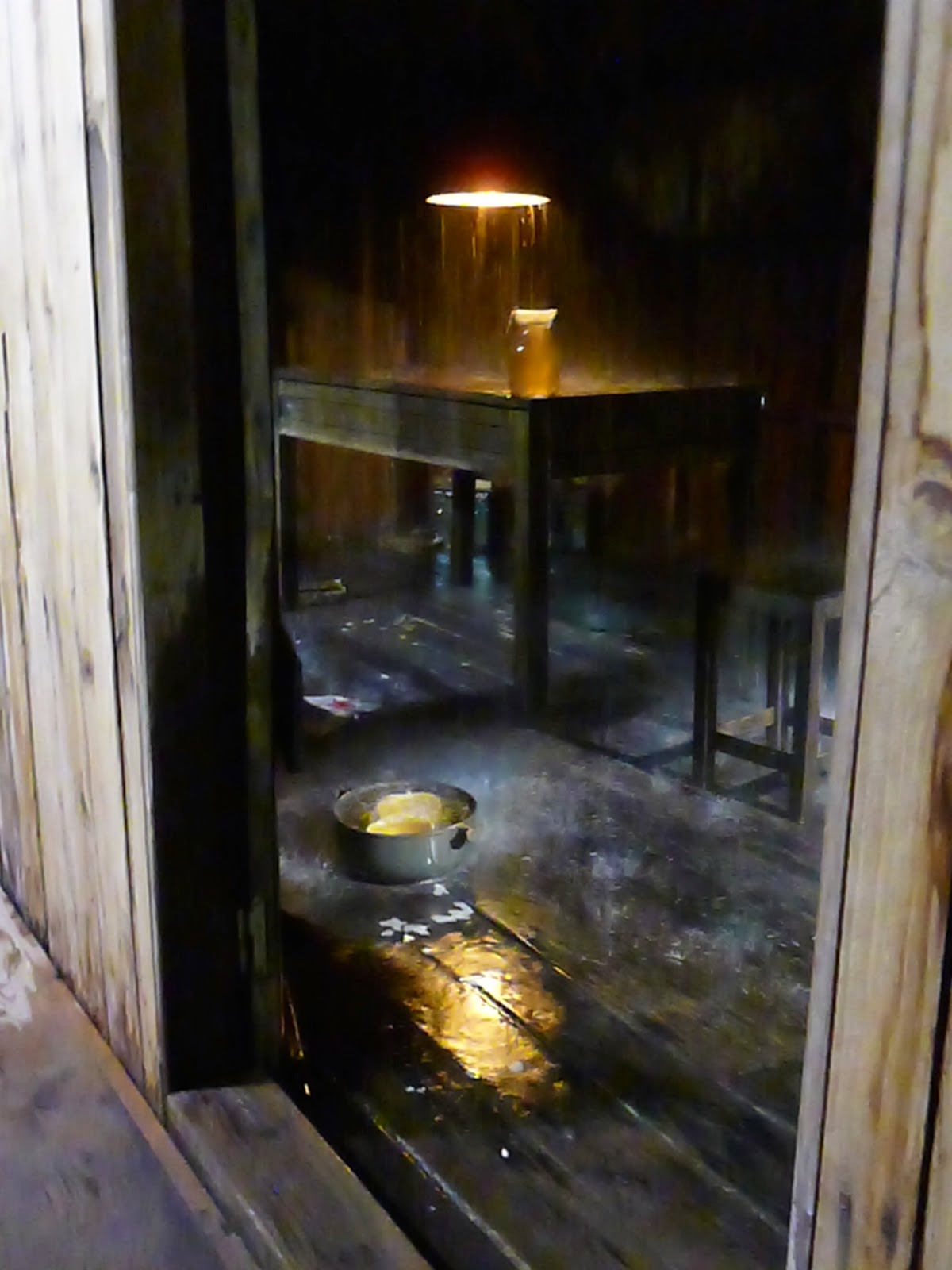 But if you want to crawl inside an installation made entirely of Scotch tape, walk thorough a destroyed house, watch it raining inside and see a lot of beautiful drawing including street art down the staircase, then here are many, many things to enjoy. 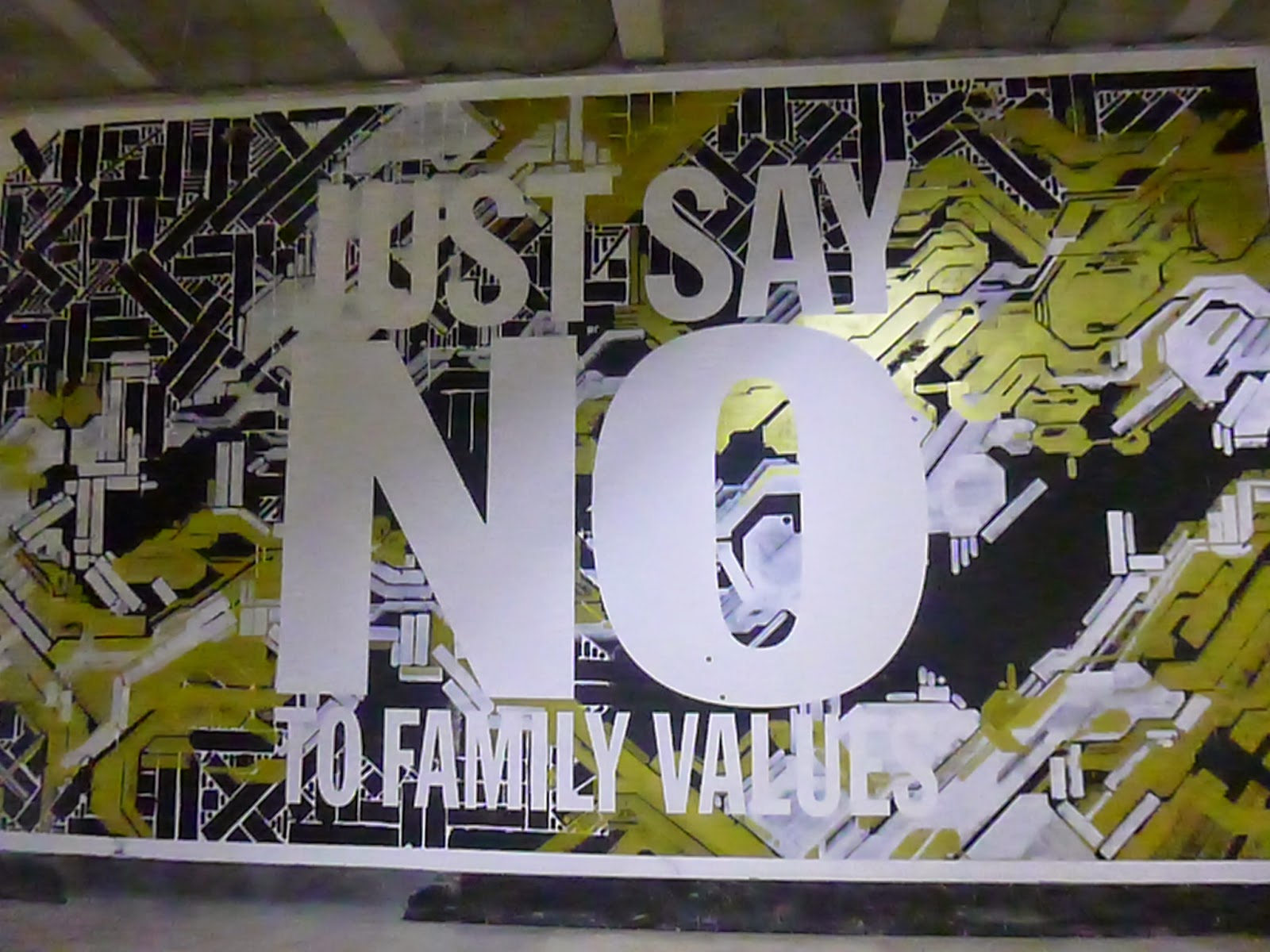 It's not cheap at 12 Euros, but it kept us talking. laughing and asking questions for three hours, which is probably the point. Enjoy!
Posted by Kate Noakes at 02:59 No comments:

Jeff Koons at the Pompidou 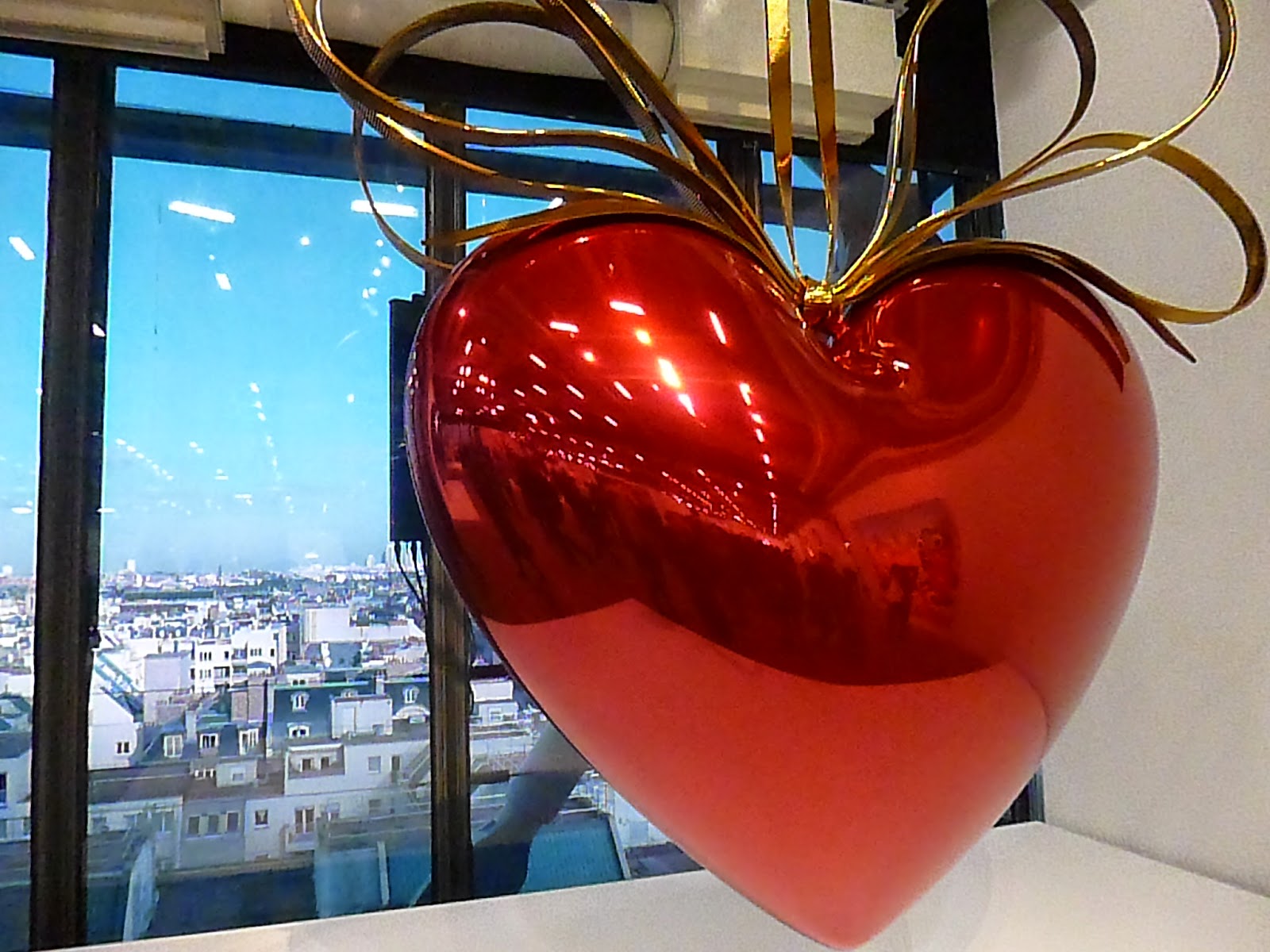 I'm trying to work out what I think about Jeff Koons' work. I've seen it all over the place in the UK, US and elsewhere. He's ubiquitous and popular. But is it any good? Bring on the large red heart Christmas decoration. That at least is seasonal. 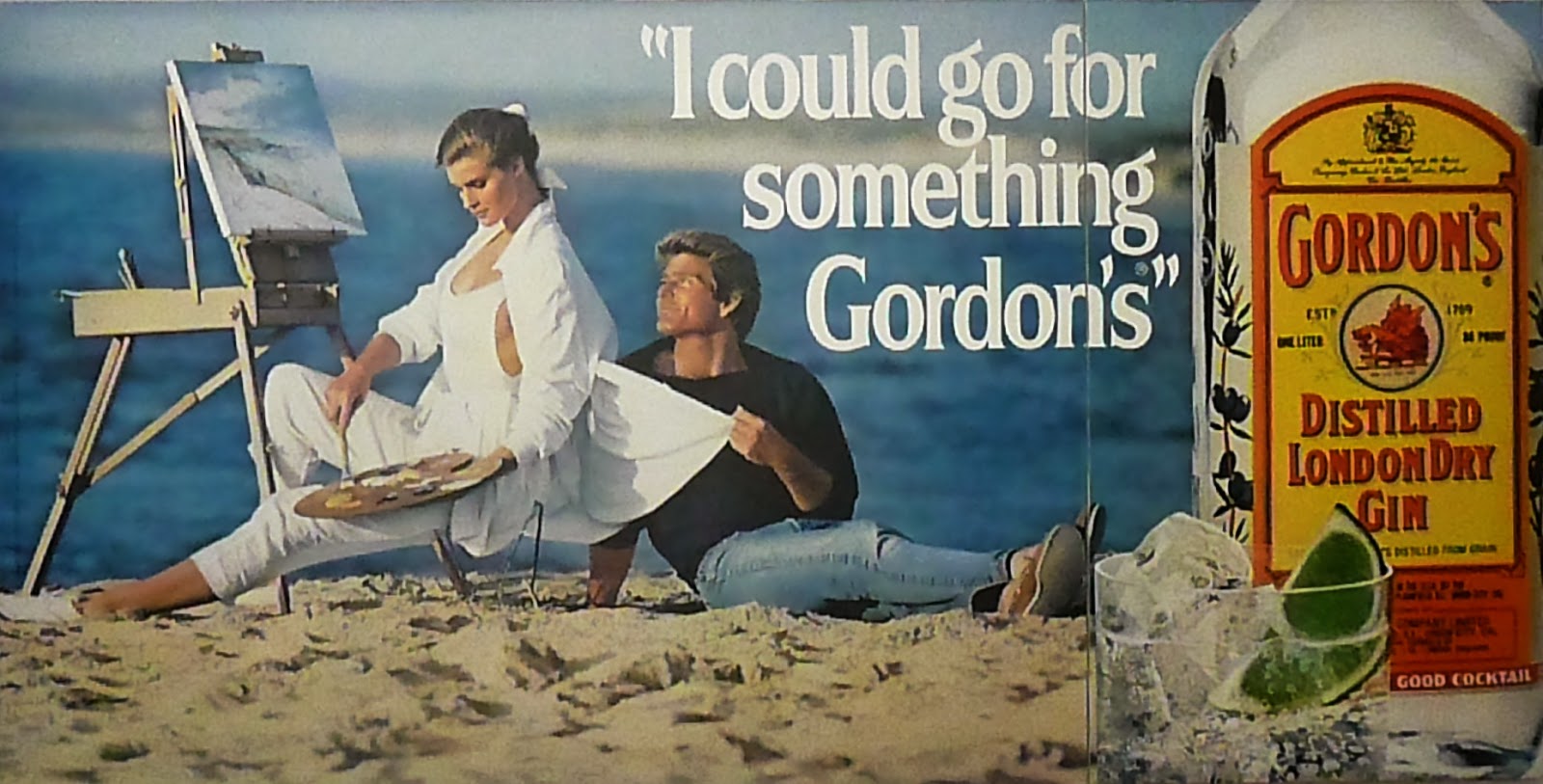 I don't know. Sometimes it makes me laugh as in the hilarious 1980s alcohol adverts. 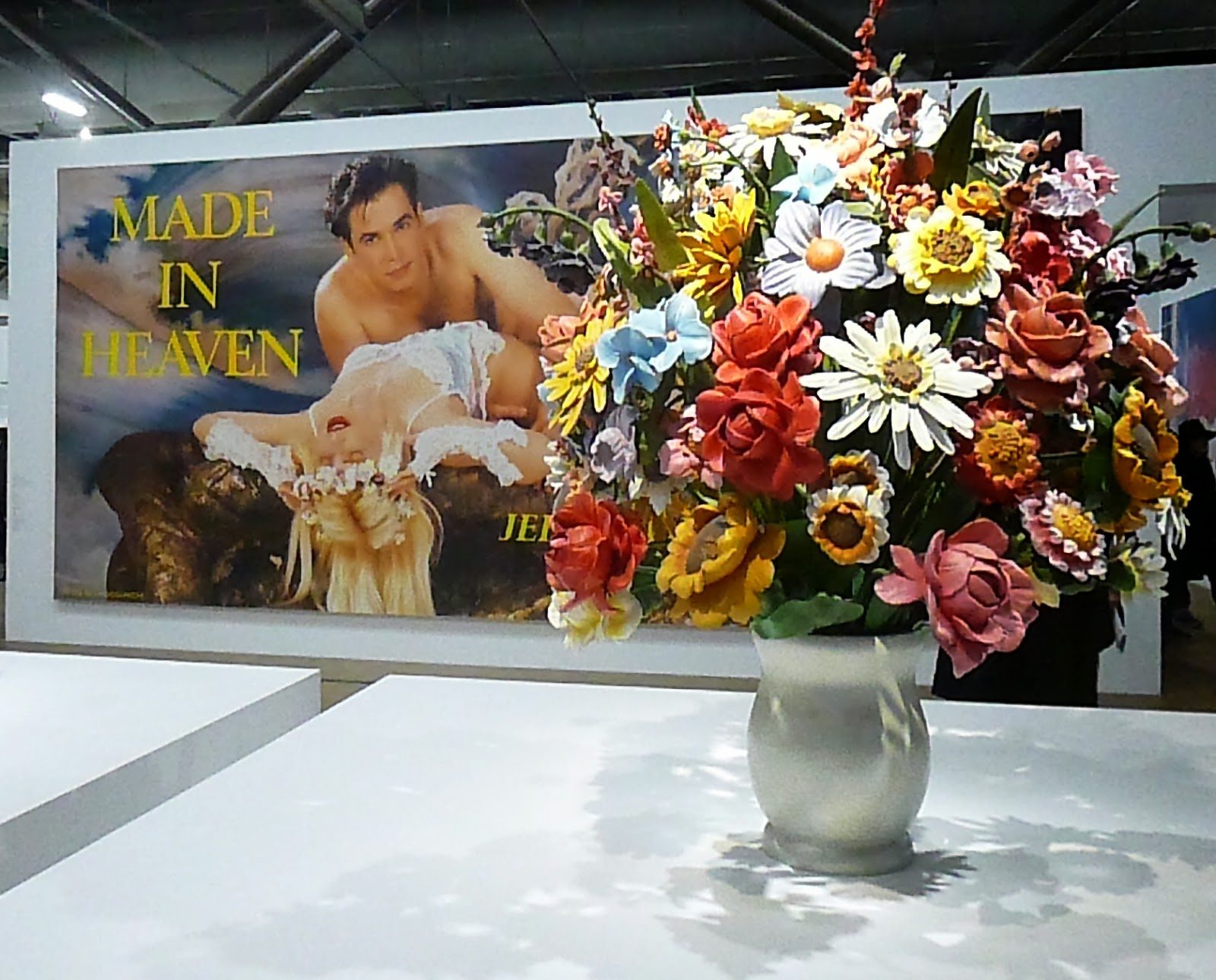 Sometimes it leaves me cold. I'm not shocked by pornography. I think it rather dull to take pictures of oneself having sex. Perhaps I am odd. Perhaps not.  Be warned there's an over 18s room.

I'm not amazed by metal castings of inflatable lobsters and the like or the Incredible Hulk turned into an electric organ. 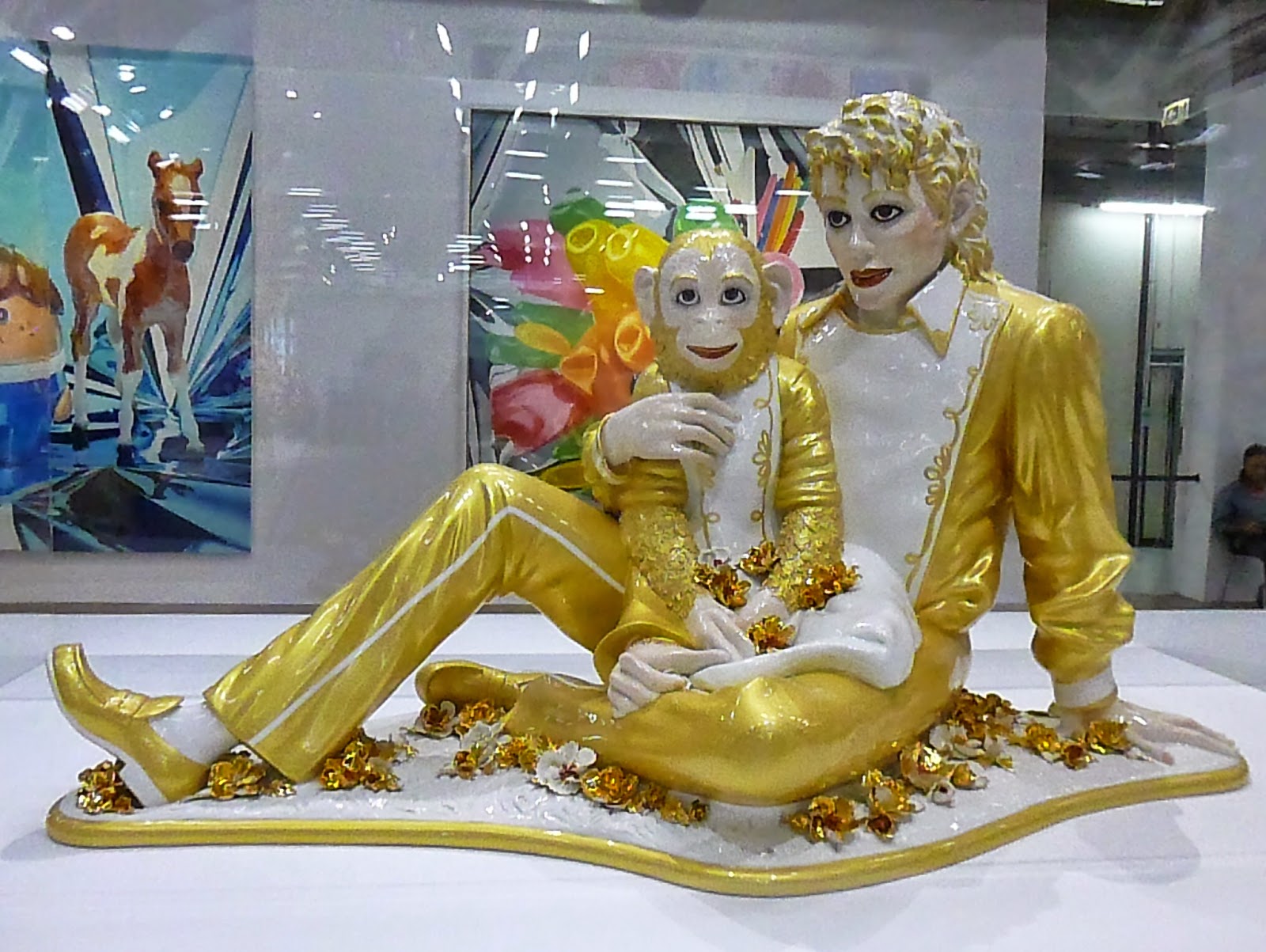 The 'classic' Michael Jackson and Bubbles ceramic sculpture is now housed behind plexiglass. Last time I saw it in San Francisco it was not. Why is this? Perhaps someone might take a hammer to it. Would that be a bad thing? It's really kitsch.

On the whole I'd rather not have anything here in my house, especially the scary kitten in a sock on a washing line. I suppose I should not be surprised then that the paintings of toys are indeed, in the words of my teenage daughter, 'pretty fucking terrifying.' 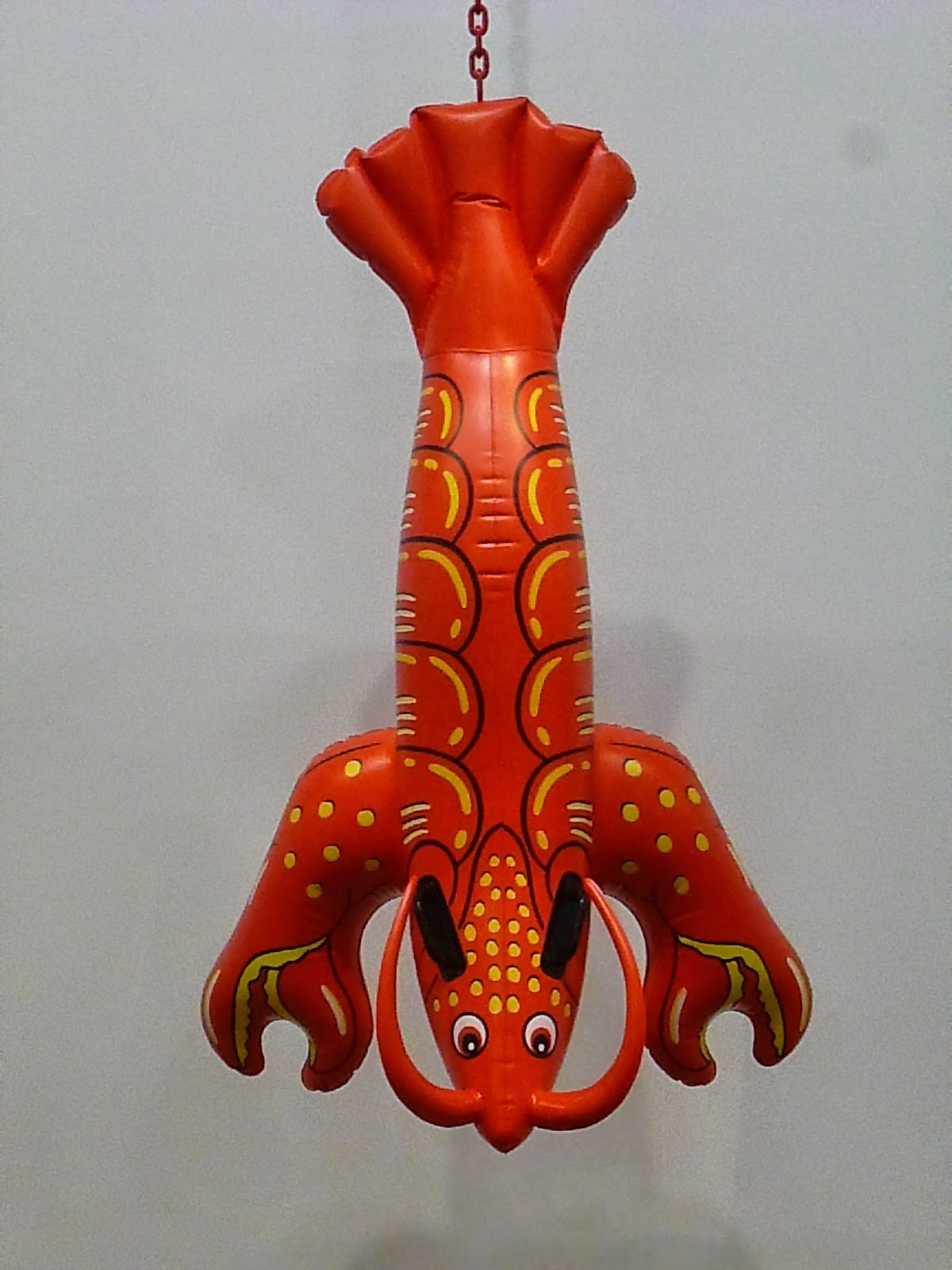 Make your own mind up. What do I know apart from, Jeff Koons,  meh! I came away with more than a sense of having been to a degree show where the marks were a little disappointing.
Posted by Kate Noakes at 10:07 No comments: 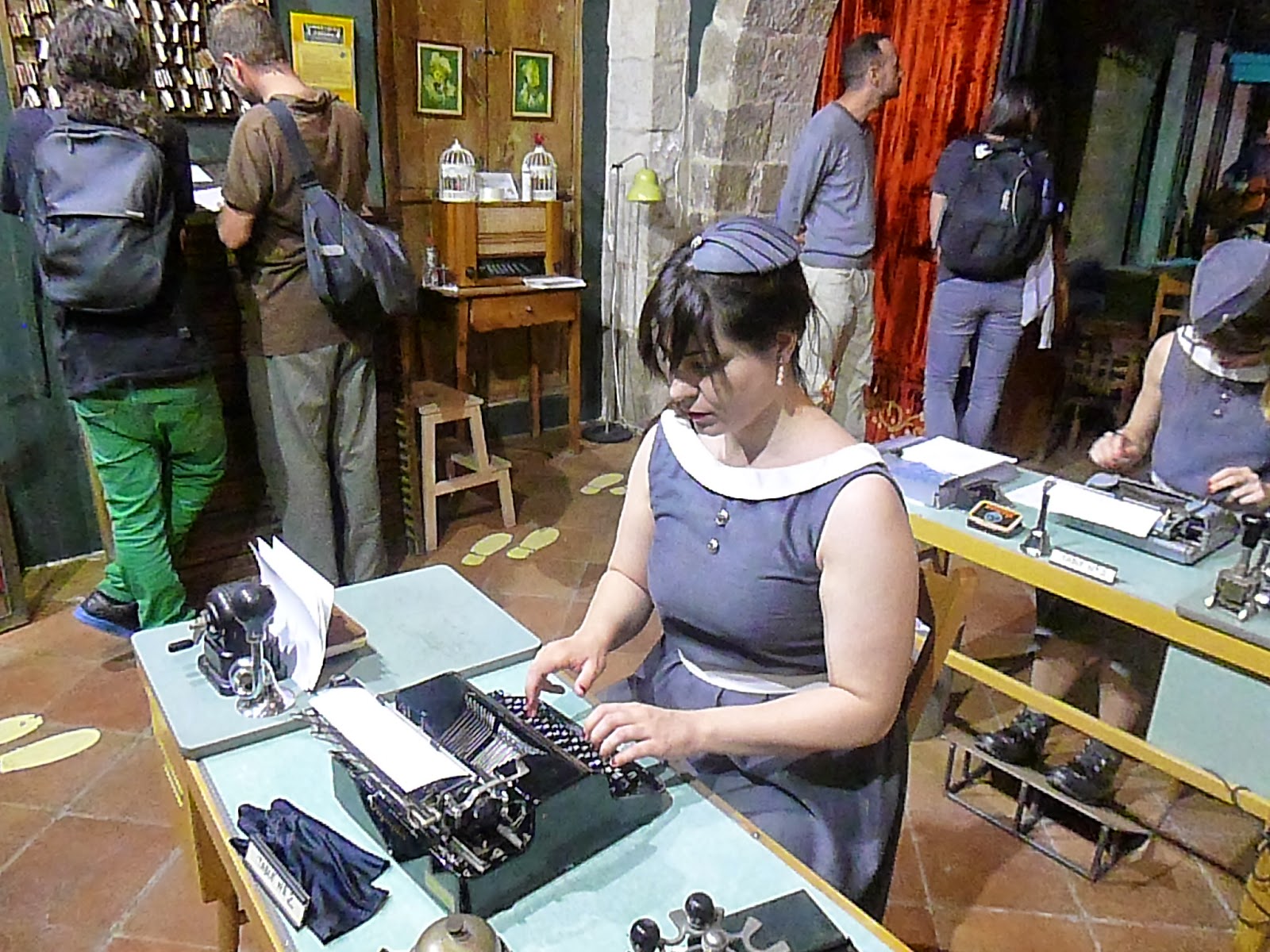 You stop at the Poetry Dispensary/Pharmacy at 8, Career dels coroners in Barcelona, a stone's throw from the Picasso Museum and this is what you get for your one or two euro donation from Barcelona Take Away Poetry: the chance to pick three words from the stamp board, queue for a little and have a unique poem crafted for you by two poets.

Ok, so it's a bit of a gimmick and I don't read Spanish well enough to judge whether the poem is any good, but it met the brief of using the three chosen words, which in my case were body, future and believe,  and it was a novel hour with a free band playing in the back room (not that I suppose they have one every Saturday). I'm not entirely sure about the whole poet-hostesses in uniform thing, but the desk accessories were fun, even if the first typewriter broke when it was my turn.

And the poem - a little hard to decipher due to ribbon issues, but I've translated it with help from the Spanish boy and then made this rather shorter English version:

My body a dark country
of secrets, spirit
heaven and hell
bleeds poppies of passion.

A sea stormed
with the lost
will have me believing
in monsters and angels.

One day I'll believe in you.

This website is going to be archived by the National Library of Wales as it is apparently important to Wales' documentary history. I am honoured and rather amazed. Diolch yn fawr.
Posted by Kate Noakes at 07:10 No comments:

Labels: library, national library of wales, wales
Newer Posts Older Posts Home
Subscribe to: Posts (Atom)
This website is very proud to be
archived by
the National Library of Wales