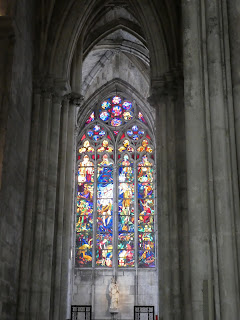 It's difficult to hide the world's first Gothic building, but if you put it in a northern suburb of Paris with a certain reputation, then it's hardly surprising it has taken me five years to get around to visiting it. 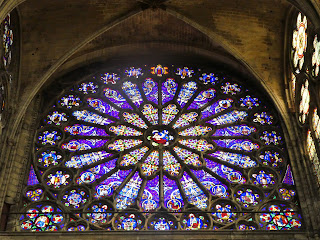 Joking aside, this is a magnificence that everyone should see at least once: huge vaulted ceilings, beautiful rose window, and the main draw: the fabulous, mostly marble, tombs and mortuary effigies of the Kings and Queens of France. 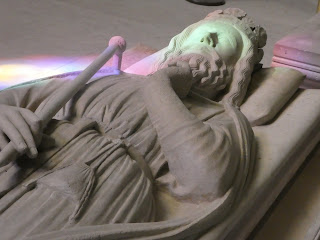 Word of warning. It may be 20 degrees outside, but the church is absolutely freezing, especially the crypt, so wrap up unless you like you want to catch you death, so to speak. 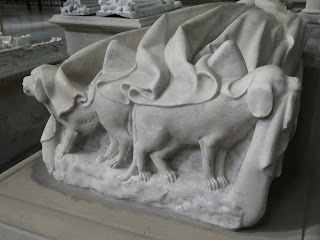 Fascinating to see and a real test of my memory as I didn't take the rather time consuming tour and had to drag up my rather shaky knowledge of French history. Noses and staffs broken during the Revolution, the grim tale of Henry IV's head, and the real mummified heart of Louis LVII await you. 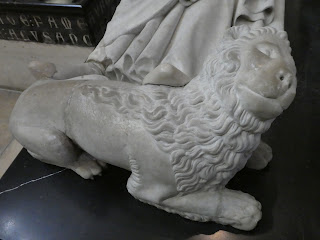 I was particularly taken with the lions and dogs on which the monarchs and their spouses rested their feet. Some were comical, such as dogs pulling on their mistresses cloaks, and some were down right odd, as if the sculptor had never even seen a real lion, which indeed, he may not have. One was even a ferret. 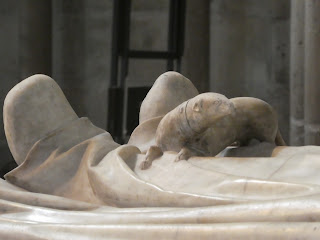 Coffee in the sunny square afterwards before heading back to line 13 was not only welcome, but essential.
Posted by Kate Noakes at 07:12