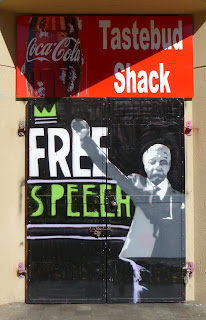 Last Saturday I had the pleasure of attending the English Pen Literature Festival in London, a day long series of performances and readings in support of imprisoned and suppressed writers from oppressive countries around the world. We heard of those silenced as a result of their writings, mistranslations of their work, their mere existence and the supposed threat their words represent in regimes afraid of criticism and free speech. The participating writers responded with new work of their own, variously explaining the situation of the writers with whom they were in dialogue.

One comment that came up more than once was how difficult and uncomfortable it was to make work based on the plight of another writer. One person even called such efforts obscene. I have been considering this for the rest of the weekend and I am not sure I agree. The brief after all was to do just that, and, as we are writers, we ought to be able to write about anything, no? If what was meant was that it is an intrusion to put oneself in the precise shoes or, more likely, bare feet of another writer, then granted, trying to describe torture and deprivation by hi-jacking another person’s experience and emotions, could be seen as distasteful. How, after all, could one know, exactly?

But there is more to consider in these ethical ambiguities, surely? If a writer has been silenced, is it not another writer’s role, or even duty, to help them have a voice? We are writers and have imagination, and should not too readily censor ourselves. That would be to perpetuate the wrongs. I think what would be obscene would be to try to pass off someone else’s experience and emotions as one’s own, so, yes, the I is I first person should probably be abandoned, if not at least carefully considered in this project. Yet, writing in the third person may seem too distant, or the second, again too knowingly dictatorial, but these are what we have and it is our job to make the best of them.

The work shared on Saturday took many approaches; the most successful in my view were those who tried to use the silenced writer’s words and work directly, either as mash up or, sample, woven into letters and diary extracts, or forming parts of poems, or using the numbers of years or months of a person’s incarceration as the number of elements in the piece of writing, i.e. to control its structure. More traditional ways of tackling a response included using classic/historical depictions of violence and martyrdom, and poems in response to one of the writer’s poems.

It was a marathon of listening and, if this is not the wrong word, enjoyment, appropriate given the sheer number of people deprived of their freedom and voices; things we take too lightly for granted.
Posted by Kate Noakes at 05:08