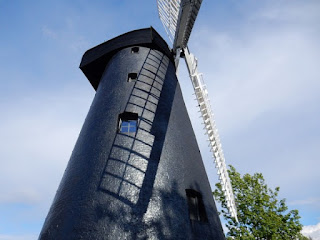 Not to be confused with the famous music pub of the same name, the windmill stands in a little park just a stone's throw away. Ashby's Mill, as it is more correctly called, is a little remnant oasis of the countryside before it became built over and turned into South London.

By the end of the nineteenth century, with the wind blocked by buildings it fell into disuse to be resurrected for another thirty years until 1934 by the installation of a steam  and later gas engine.

Open inside occasionally, but viewable all year round, it's one of those quirky things we flaneurs rather enjoy finding on a sunny day.
Posted by Kate Noakes at 06:47