Among those Killed in a Dawn Raid was a Man Aged a Hundred: longer than a newspaper headline, this poem (pg. 112) has a title that tells you everything you need to know of the subject matter before you even start reading it. It is a deliberate shock tactic in its bluntness and the reader's eyes move down to see how Dylan is going to handle the matter. 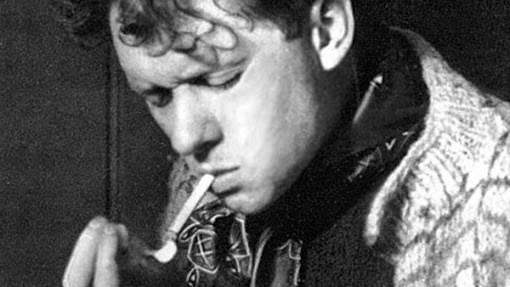 Well, there is no sweetness in the first two lines which are matter of fact and end with 'he died.' Then the poem explores the horrifying sight of the old man knocked off his feet in the street by focusing on the broken aspects of the physical scene: 'the burst pavement stone,' 'the slaughtered floor,' and the man's broken body: 'the craters of his eyes.'

The sonnet, for that is what is is, continues with imperatives: 'Tell his street on its back he stopped a sun' and 'Dig no more for the chains of his grey-haired heart.' It cries  ('O') a wish that the man is spared from a pauper's grave and ends with a repletion of morning and on an uplifting note that humanity will continue: 'A hundred storks perch on the sun's right hand.' A wonderful and striking image that.

One of the finest poems written about the war? Probably.
Posted by Kate Noakes at 23:42