Yes, probably Dylan's most beloved poem, Fern Hill, (pg 134)  and read here by Richard Burton, has all these elements. It is both hymn of praise and love song to a rural upbringing 'Now as I was young and easy under the apple boughs.' 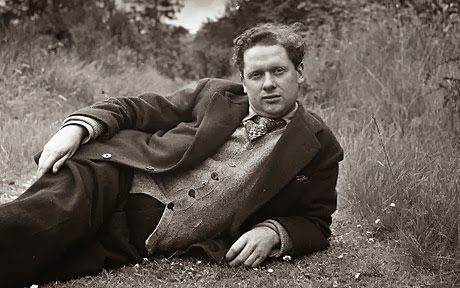 Apple tree related images are just one of a number of motifs that repeat themselves throughout the poem, as does the colour green, green also in the sense of innocence in this paradise, emphasised, as if that were necessary, by his mention of 'Adam and maiden' and indeed the apple tree itself.

Other religious imagery also appears in every stanza ('his eyes,' 'the mercy of his means,' 'blessed,' 'fields of praise,' 'follow him out of grace,' 'lamb white days' and so on).

But the poem changes tack in the last stanza with the lack of foreknowledge that 'time would take me' out of innocence and to the final couplet: 'Time held me green and dying/though I sang in my chains like the sea.' What exactly does Dylan mean? It seems to me that this is the adult reflection of the illusion of childhood as not as idyllic as we might remember, green but a kind of death to the will perhaps, and happy enough to ellicit song, but still be enslaved. Perhaps that's why he called it a 'poem for evenings and tears.'

Things to be enthralled by in this poem are, as always, the lush and beautiful imagery. Who doesn't wish that they had thought of 'the sabbath rang slowly/ in the pebbles of the holy streams,' or describing a farm on a winter morning as 'like a wanderer white/with dew?' Lovely.
Posted by Kate Noakes at 10:04