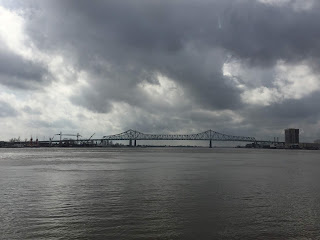 and not a drop to drink. So runs the old song. And in New Orleans there is water everywhere. One of the first things my friends told me was not to drink it. The tap water is of dubious quality, and those who can afford to do so buy gallons of drinking water for their in home water fountains. That was a surprise. I didn't realise parts of the US were unreliable in this regard - Flint, Michigan being the notable exception, but then I've never been to the south, except the odd business trip to Miami and Atlanta. It reminded me of holidays in Italy in the '70s when we had to do the same.

But what of those who cannot afford a safe supply of this most basic of needs? Well, along with the homeless guy I saw using the front yard tap of a nearby house for an impromptu shower, they have to risk what comes out of the tap and hope that the water companies are on the ball as regards quality monitoring and alerting the public when it is unfit. Does that sound second or third world to you? Welcome to the US in 2019. Great. 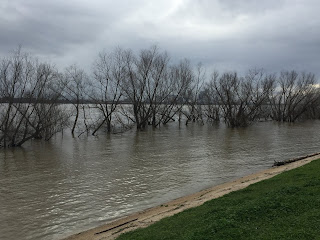 Ironically enough in NOLA there is water everywhere, so if one is not trying to find the clean stuff, one is trying to get away from it. The mighty Mississippi rushing its way out into the Gulf via a series of spectacular meanders was in full spate this spring and at such height up the levees that the chance of flooding looked rather high to me.  I was aware of sheer force of water every time I looked out at it. And it was a menacing presence even when hidden by thick fog. A huge river at this point, it makes the Thames look rather small. Of course, I reminded myself, it drains practically the whole eastern half of the continent.

NOLA is surrounded by water: the river, the industrial canal that bisects the city, and lakes Pontchartrain and Borgne to the north. All full, almost to over-brimming. Such was the volume of water that the spillway was opened during my visit. About an hour's drive up-river out of town as we crossed one of the elevated sections of freeway on our way to a lovely catfish supper in the bayou, we passed the point where millions of gallons of freshwater are diverted into the cypress swamps. Absent the city's development, these are the natural habitat here. One glance at a map from two hundred years so so ago, not long after the city's founding, and you will see a neat grid pattern in a, pardon the pun, sea of half-land labelled thusly.

If the river isn't adding to the volumes of water, then the sky is doing its best. Rain in NOLA does not take any prisoners. With weather systems that come north from the Caribbean, the city can easily be swamped with water. Indeed it was hit by a major storm a couple of months after I returned home and a large part of the city was badly flooded. I can attest to the rain: one evening we were busy dodging a storm with inadequate umbrellas, and were badly dressed for the huge puddles as we went from dive bar to dive bar. It was a scene straight out of Bladerunner. Come in another season and the air is heavy with hair-curling humidity as well. It is no surprise then, that the smell of damp and mould lingers, although on the upside one's skin feels fabulously hydrated. 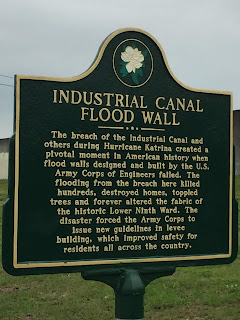 If not the river and the sky, then the sea is doing its best to overwhelm the city. The National Park Service estimates that a football pitch sized parcel of land is lost to climate change induced coastal erosion in Louisiana every forty five minutes. Just let that sink in (sic).

Not long then till there's nothing left of the Gulf coast states, so enjoy them while you can. Particularly worthy of attention is a little disaster tourism. I was genuinely interested in seeing the Lower Ninth Ward, where the canal wall was rammed by a barge that came loose from its moorings during the post-Katrina storm surge in 2005. The subsequent deluge over the largely black working class neighbourhood, most of which is below sea level, caused the greatest suffering and loss of life. 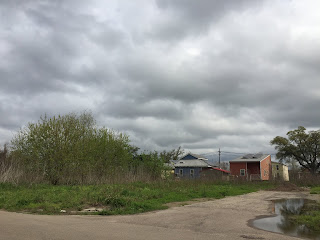 This is well documented, but I haven't seen much on what has happened there since. I'm happy to report that there has been a good deal of rebuilding, but not as much as you might expect. About a third of the plots are in current occupation. Many people, uninsured or refused their claims - that's another scandal - chose not to return. The result is that nearly fifteen years on it is an oasis of green with maturing trees and boggy ground, and a haven for bird life. Cycling around one steamy afternoon, I was accompanied by more birdsong that it is reasonable to expect in a major city. That was truly joyful.