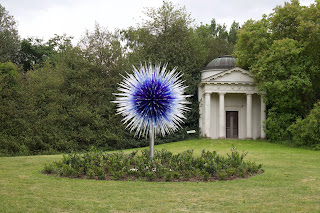 I first took note of the spectacular glass work of American, Dale Chihuly when I lived in San Jose. He had made three chandeliers for the San Jose Museum of Art. These are similar to the one in the entrance hall of the V&A. In 2002 or 2003 there was an amazing exhibition of his sea forms at the Monterey Bay Aquarium, which paired with their live jellyfish was an astonishment of beauty. 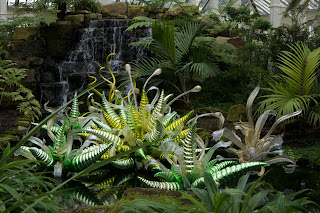 There are few words to describe his glass sculptural assemblances. Photographs do the work some justice, but these are no substitute for seeing them in person at this summer's unmissable display at Kew. Pick a sunny day to pop along and don't bypass the important though long film, which shows the creating/making process in some depth. 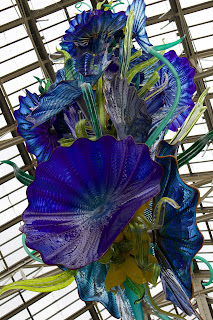 Ten out of ten. Kew have shown his well-sited work before and I missed it. No wonder it's come back for a repeat performance. Oh, and there's some outstanding plants to enjoy as well.
Posted by Kate Noakes at 02:15