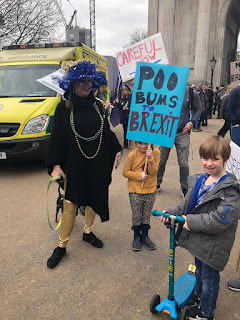 The unbelievable mess that is Brexit rumbles on, now until Hallowe'en. The EU might have a sense of humour, but no-one can plan anything. No-one knows what is going on, not even the zombie PM and her undead government who are supposed to be in charge of this show.

One thing we do want, though, is the chance to say Remain, again. And hope this time that it works, now that folk understand that job losses are real and happening. It's heartbreaking to see and no amount of 'you get what you vote for' is any kind of salve.

Did a million people march on 23rd March, or was it 2 million? Who knows? But I can tell you that the streets were absolutely rammed with charming, happy, kind people from all over the country and who just want their say. Such a contrast to the tiny pro-Brexit rallies the following week, fuelled as they were by hate and intolerance. 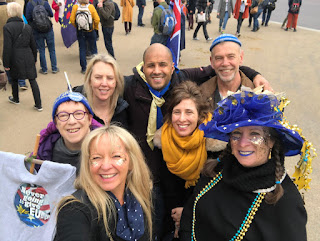 I was proud to be marching, well, shuffling, again, even if compared to my compatriots, I look completely bonkers. That hat was great fun to make and attracted a deal of attention from photographers and TV crews. I hope I have the chance to wear it again on Referendum Two day. My German dog, Bru, is getting used to crowds. The kids' sign was outstanding. Quality glitter was their reward.
Posted by Kate Noakes at 08:53