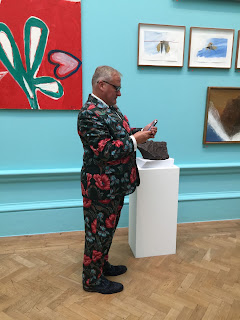 This year Grayson Perry did most of the honours in selecting and hanging the exhibition of Art Made Now. Thankfully the totally overused in inappropriate ways word 'curate' was nowhere to be seen. He had the galleries painted some pretty lurid shades of yellow and pink though, but they worked well. 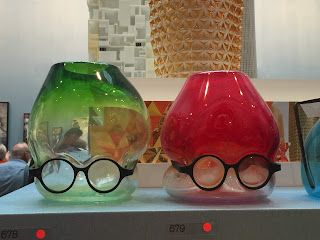 There was nothing ground breaking, but there never is, and that, in a way, is not the point of this most democratic of shows, where five Sooty puppets stand as much chance of being selected as a sign for Unaffordable Housing or a bunch of painted sticks. 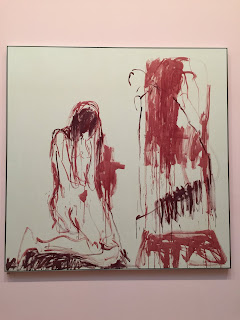 I enjoyed spotting the new work by some of my favourites like Tracey Emin (one painting and three lovely prints.- all figurative), Bill Viola (a mesmerising video from his people walking across the desert series), and Perry himself (huge print and lovely white people pot - a ceramic of Alan his teddy bear is hiding in the basement, only to be seen by members if they go down to the secret bar). 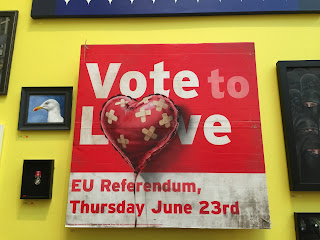 There was an anti-leave Banksy priced, of course, of £350 million, a new Anish Kapoor in the main courtyard (a huge red disk, hanging over a pile of weathered and vegetated basalt columns plundered from somewhere), and a host of generally lovely prints on the second floor. 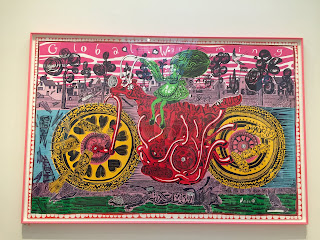 The galleries were packed the day I visited as it was pouring with rain and in the exhibition's last week. We headed straight to the downstairs member's bar for coffee and later, lunch. Sssh don't tell anyone but the bar, which also serves food, is quiet even when the member's rooms are packed, and you have two glossy tree ferns to enjoy in the little courtyard.

I am pleased to report that the, no doubt ironically chosen, portraits of Farage and Moseley remained unsold.