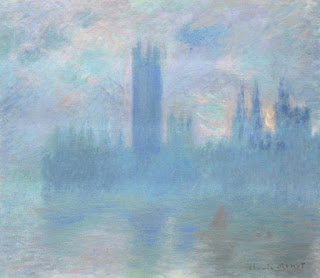 The quietest times of the year to visit a gallery is just before Christmas and between Christmas and New Year, when everyone is elsewhere doing other things. Hurrah for that. December 23rd at Tate Britain was calm, almost empty, and we had the place to ourselves. Perfect conditions for viewing the Impressionists.

I'm not a massive fan of this period really, but there is much to admire here from Monet, Pissaro, Tissot and all the others who fled the Franco-Prussian war and the Paris Commune for the safety of London, preferring to paint our suburbs and sporting events over the brutal realities of home.

Monet's series on the Palace of Westminster capturing the fog are worth your while alone. But sit in that room for several minutes, adjust your eyes to the lighting to get the most out of them, in the same manner as one had to with the Rothkos in their special room in days of yore.

Quite by accident, I drove passed spot where Pissaro lived in West Norwood the week before. Seven days later I find myself studying his painting of the same street in snow. Funny, these life co-incidences.

Pop along if you can afford to pay nearly £18 for the privilege. At this price, and why are exhibitions so very expensive?, it's making my membership look like a total bargain.
Posted by Kate Noakes at 03:50