Cy Twombly at the Pompidou 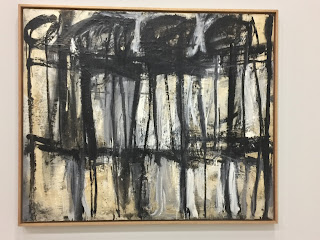 In London at present the Tate is showing a major Robert Rauschenberg retrospective. In Paris, his friend and travelling companion, Cy Twombly, is the Pompidou's new show for the winter.

I struggle with expressionism. I imagine this is because it is hard for me to translate the expression of one person's feelings in an art work into my own feelings, as my main currency of expression is words, a much clearer medium for ideas in my training. So, hello Twombly, who uses plenty of those, even if at times they are vague, illegible and hard to figure; at least they are signposts of sorts. 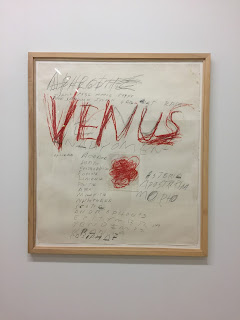 If you have a good acquaintance with Greek myth, then you will certainly 'get' most of the middle to later works here. The only question then will be whether you like the images. And I have to say that I do, certainly the works from the second half of his career. For me, he definitely improved with age. I was smiling more and more as the show progressed.

Twombly is variously described as daring, confident and so on, and this is plain in his brush and pen strokes, which have fluidity and great control. You might find yourself saying 'a four year old could do that', and in some cases they can and do, such as the early crayon drawings. But look again, there is so much more to these scribbles, Twombly has met Picasso's challenge, to re-learn to draw like a child, full on and so successfully; take Achilles' shield or Ra's boat for example. 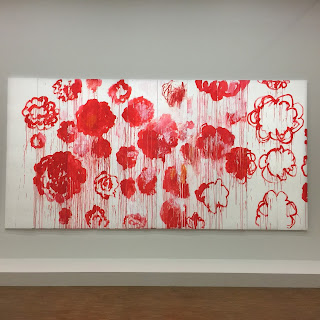 The Pompidou has assembled an excellent selection of his work, which is largely in series of paintings, that have travelled from the US, UK and elsewhere to be here. My favourites were the huge late Bacchanalia, and Blooming series. Go choose your own.

And now for the nit - I have a particular bug bear about the use of the word poetry in relation to art. With Twombly, who made many works in response to poetry, that is perhaps a forgivable slip, but a painting is not a poem, not even if it's genesis is occasioned by reading Homer, Keats, Spencer and so on. 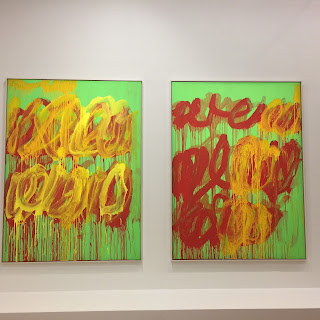 So, I grit my teeth when I read a quote from Restany at the start of the free brochure: 'His handwriting is poetry...' No, it's not. It's handwriting. Equally I was annoyed to see the series of flower photographs described as 'succinct poems'. No, they aren't. They are photographs. Describing art as poetry, poetic, a poem, is so unspecific as to be meaningless; a bit like describing a poem as a picture.
Posted by Kate Noakes at 01:21