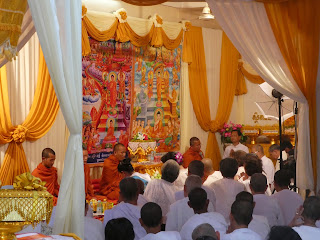 Imperial, and buzzing like helicopters, swarms of them around a tree on a waste lot as I was stuck in traffic coming from the airport. And again at Wat Phnom, around stupas and across the curved roof tops. And again over the next twelve days at odd intervals by a pool, at a waterfall, at the beach, when I was least expecting them. It was the season.

Under the aerial roots of a Banyan tree I am drinking French wine, ironically enough. It’s not great. A leaf falls into the pool, floats for a while before being swept over the edge by the residual motion of swimmers, to infinity. Then there’s your Asian swallow

A Wat Phnom, birds in cages. I cannot figure the reason for having fifty or more moth eaten birds per cage at the temple. They have so little room that each time they flap their wings against the humid air they hit each other or the bars. Poor moulty birds. And the same with two cages of spotted doves in blue and grey collars. What is this about? And the mynah birds, two in filthy cages and who have been taught to say hello in English. I wish someone would explain this to me. 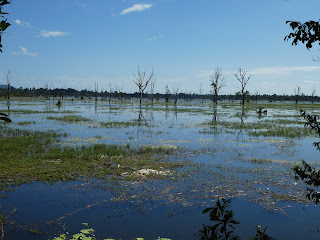 Everywhere plastic bags, tossed plastic water bottles, split bin bags, nappies and glass bottles on the beach, picnic places filled with take away and leave behind polystyrene containers of fast food, lumps of concrete, cement dust, coffee cups. You’ve finished your iced drink? Even my driver chucked the receptacle out of the car window, swiftly followed by several cigarette butts. Every watercourse is filled with rubbish, even at Angkor Wat. Every street is piled with refuse. There is a long way to go for civic pride to mean anything. It looks like every music festival I have ever been too, but worse; hardly anyone is clearing it up. Even the park by the royal palace is strewn with litter at the end of each evening. Funnily enough it is cleared at dawn. To my question as to why you treat your country like a garbage dump. A quizzical laugh. Only tourist do recycling. It salves our consciences, but makes no difference in a country where women do their washing by foot as if treading grapes. is a daily massage either by a blind or partially sighted person at Seeing Hands, or in the spa a short walk down the street. In the daytime I am still enough for one of the hundreds of beautiful butterflies to land on my leg, twice, or on another day for one to choose by breast. I am doing nothing more than looking at strangler fig roots suffocating thousand year old stones. This counts as busyness. Between tour groups it is quiet enough to hear the forest birds singing, and the trees growing.

Watching Korean and Chinese visitors taking their holiday snaps is an entertainment in itself. They strike all kinds of ridiculous poses, which they find highly amusing; looking the same way as the statue, playing with perspective, finger on the top of a stupa, that kind of thing. Hilarious, and presumably designed to avoid having to look at the monuments. Perhaps I need to loosen my sense of what is cool and laugh more often.

Western tourists take pictures of children as if they are monkeys. Why do people act so differently when away from home? No sign of any children being abused by 70s pop stars and their ilk. Protection and phone numbers to report abuse seem to be the order of the day. Yet, one guest house needed to remind us not to bring sex workers to our rooms. 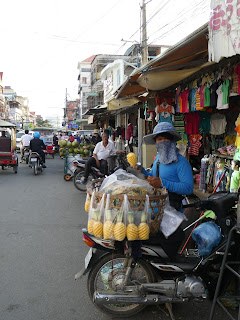 Unlicensed sales of petrol by the roadside. Fine apparently and not bottles of lemonade. Containers of all kinds.

Dogs with long wheel bases, and of no apparent breed.

Birds in a tree at the beach, noisiest during a thunderstorm. Lightning forking the sand.