Ai Weiwei at the RA 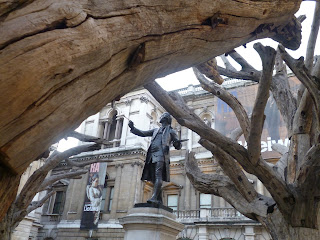 This is not the first time I have been to an Ai Weiwei show, but it may be the last. In a word, disappointing. I get it now, actually I've got it for a long time. The message is wearing thin and this is not art that I have to think very hard about. 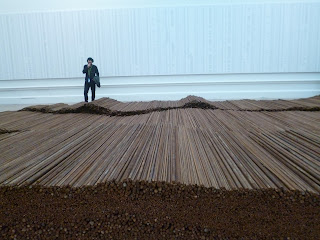 Yes, it is important that he continues to show up the Chinese government and its secrecy, duplicity, control, hypocrisy and so on, and yes, it is appalling the way Ai has himself been treated, but I think he has reached the point now where politics has over taken art if it takes an army of people and three studios around the world to create his works. Take for example the steel rods from the earthquake destroyed schools and the number of workers needed to straighten them. Yes, they are nicely arranged and fitted together in a pleasing wave form, but really, is that it? 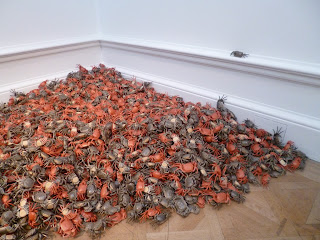 Such were my feelings as I toured Ai's latest show. Yes, it's good to see the drip vases and marble camera, the jade handcuffs and the enormous cube of tea, but I wanted more. It's a function of the size of the works and the relative lack of space in the RA to do them justice.

Go if you've not seen these in the flesh before, but if you have, beat the long queue and perhaps save those 17 good British pounds for something else. The porcelain crabs though are cute.
Posted by Kate Noakes at 06:21