My next workshop at Shakespeare and Company on Sunday 5 May at 12h30 will be about using your family stories, real or imagined, to create new poems and pieces of prose. In advance of that I want to take a very brief look at one of Sylvia Plath's iconic poems and then set you a writing exercise. 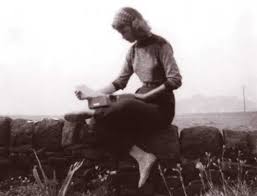 Daddy, Plath's tirade against and exorcism of her father, is one of her most well-known poems. It starts as it means to go on 'You do not do, you do not do'  and ends 'Daddy, daddy, you bastard, I'm through.'[1] Plath is much criticised for the hyperbole and inappropriate metaphor in this poem usually on the grounds that whatever her father did to her it simply can't have been as bad as the holocaust. But as Plath herself explained in a radio interview; it’s complicated and created tensions for her as her father was a Nazi and her mother may have been partly Jewish.[2]

At its core, the poem is about power and powerlessness: the power exerted by her father on Sylvia from the grave (he died when she was ten) – ‘the black shoe/I’ve lived like a foot/ for thirty years’, ‘Every woman adores a Fascist,/The boot in the face’ and so on. It is also a personal narrative mentioning her first suicide attempt at the age of twenty. So, there is a lot going on here and much critical ink has been spilled on the subject.

I want to take one aspect of this work as a writing prompt – think of one of your relatives, or imagine a relative, someone with whom you have a close relationship, who influences or has influenced you in some way, good or bad. Write a little scene setting about that. Give us a context. Then imagine a secret past for your relative and write about what effect this has on your relationship when you find out about it, how you think about them, how you interact, what the future holds. It might totally destabilise things, or explain things, or strengthen things. You choose. Good luck and enjoy!