Women have been hidden in London for centuries; our contribution to the nation's life often ignored. I hope this putting right of history's wrongs is just the start of it.

It's about time there was a statue of a woman in Parliament Square, not her with the handbag obviously, that would have been a poor choice and would have attracted ire and admiration in uneven amounts. No, here is the compromise candidate in the centenary of women's suffrage, Millicent Fawcett, founder of the Suffragists, as opposed to the Suffragettes. 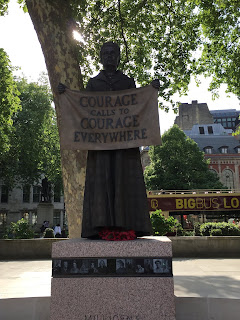 I would have preferred Emiline, but hey, violence is always unrewarded, unless you are a man. I note the statues of Smuts and Churchill over my shoulder.
Posted by Kate Noakes at 04:27