"Don't be ridiculous, how can there possibly be anything hidden in Hyde Park", I hear you say. Well, OK. Not hidden, but not often visited. Two things on a recent picnic caught my eye. 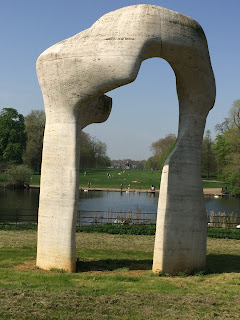 First is the great view of Kensington Palace from the Henry Moore arch.

What arch? Yeah, me neither. It's tucked away between the two Serpentine galleries on the north bank of the Long Water, and forms a rather perfect frame. First erected in 1980, taken down in 1996 as it became structurally unsound, and finally restored in 2012, it is six metres of hewn stone. Pop along one day. 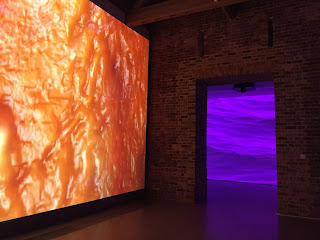 Secondly, the two Serpentine galleries, subject of much frantic phoning when you can't meet the person you are waiting for as they are standing at the other one.

At present showing video art, one of which, I forget in which gallery, is the mesmerising Typhoon coming on by American artist Sondra Perry. Much of the projection is a purple ocean that morphs into a digital manipulation of Turner's painting Slave ship (Slavers throwing over the dead and dying, typhoon coming on). Plenty of food for thought in that.
Posted by Kate Noakes at 03:21