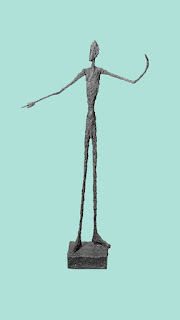 It's been an age since Giacometti had an exhibition in London, but what a disappointingly small one this was. There were too few rooms. I reached the end before I had really started.

Tiny sculptures that my old eyes can barely make out, especially if they are tucked behind poorly lit glass, large works that in all honesty I have seen many times before, and some of which are not actually that interesting, and the dark palette of his paintings, had me scratching my head, again.

Yes, I get it, working and reworking and paring down to the essence, with a limited number of sitters, but perhaps something more cheerful? Easy for me to say, as I did not live through the horrors of war or the immediate post-war reality of Europe.