The Women's March - Planning ahead 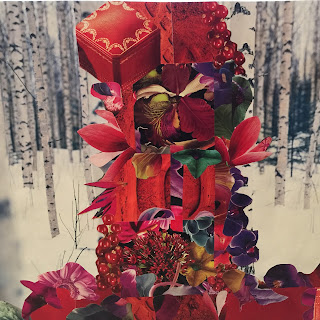 I am not American, so why am I bothering to go on the London sister march to the Washington one planned for 21 January? Good question. The answer is incredibly simple.

In the first place, solidarity and sorority. Shocking though this is in 2017, I find myself once again in my life needing to make my voice heard for women's rights in an apparently developed country, the USA.

And I do so from a sense of unity, and more, because what happens in America, tends to find its way to Europe sooner or later.

I have been surprised and truly dismayed by the creeping sexism that I have observed on these shores in recent years. Let me give just one example for now. My daughter regularly comes home in shock, upset from random street harassment. She is in her late teens and quietly going about her lawful business. Why is she subjected to gross vulgarity, propositions and threats to her person by men of all ages?

I witnessed and was subjected to it myself one evening as we were making our way home from the theatre. A car pulled over and its occupants leaned out, banged on the car doors and shouted "You slags!" at us before driving off laughing. We had done precisely nothing, yet these young men felt entitled to abuse and frighten us for their perverse entertainment.

In this context it is not unreasonable for me to wonder how long it is before a British politician and his supporters think it is entirely acceptable to denigrate women, our bodies, and our rights. How long before our contraception and sexual health are curtailed, hidden in an NHS budget cut? How long before some man decides to tinker with the abortion laws?

It's been a while since I got off my sofa and took to the street to protest about anything. That's shameful, but this is the one. When the soon-to-be leader of the free world holds such odious and dangerous views about half the human race and is brazenly espousing them, how can any of us keep quiet?

I am doing what I am able to do: lending my voice, making it heard, using my pen, making art and above all standing with everyone of good conscience to say NO to bigotry of all kinds. NO to turning the clock back to the 1950s. NO. NO. NO. 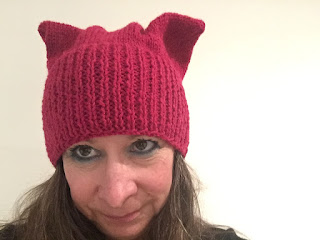 I have knitted my pussy hat and will be wearing it with pride. And before anyone says its name is ironic, it isn't. Using the word pussy is to reclaim it from the mouths of those who seek to reduce us to our genitalia. Just ask those musicians in Russia. They'll tell you.
Posted by Kate Noakes at 11:36