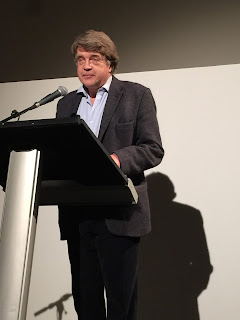 On Thursday night I had the great pleasure to listen to a lecture given by Oscar Wilde's grandson, Merlin Holland, at the Irish Cultural Institute. He spoke on Wilde and subversion, with particular reference to Dorian Gray, that so offensive novel, today given to A level students to read as an example of fine prose writing.

Oscar's "mistake", he explained, was, unlike other visitors to the culture Paris represented, to take it home and publish it, putting himself at risk of ostracisation for being a purveyor of decadence.

As we all know, his critics bided their time until he broke the law and they could rid society of a rebel who 'called out' hypocrisy; he had pushed Victorian society to the limit of its tolerance, Holland concluded. A fascinating event.

Last evening, I visited the Oscar Wilde exhibition at the Petit Palais, which Merlin Holland curated and for which he wrote the (in French only) catalogue. It is small, rather too small in terms of physical space, which is why the weekend queues are so long, but it is very worthwhile. Book and get there as soon as you can.

Chronologically it presents Wilde's life and writings using related paintings, photographs and prints; everything from portraits of the actresses to whom he addressed sonnets, to the Pre-Raphelite paintings he wrote about as an art critic, to Beardsley's wonderful prints for Salome and so on. The manuscripts on show include those of Dorian Gray, various of the plays, and De Profundis; his script in the latter smaller and more careful, as paper was a rationed commodity during his incarceration. First editions are all there, dedicated to the influential and famous, along with many letters. I enjoyed reading them all, or as much of them as I could through their perspex protection. The highlight for me was exhibit A from his libel trial - the infamous Queensberry calling card.
Posted by Kate Noakes at 04:58