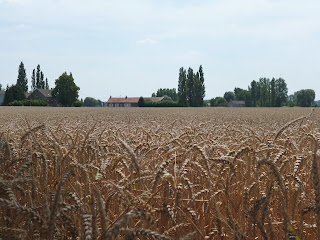 The usual wind takes the heat out of a sunny day on the first weekend in August. Northern France. The wheat harvest is in full swing - combines and grain carriers churn across the land with all the efficiency mechanized agriculture can afford. In the sea of golden grain, patient maize and two-tone cattle lie different plots. At regular intervals British and other cars stop beside the fields of white and green that dot the Somme landscape every quarter of a mile or so.

The curious, the buffs, the just-passing, the serious historians, the searches of family history, whatever their motives the passengers spare the time to stand in the corners of these forever England places. Of course, they are more than forever England as the Welsh, Irish, Scots, Australians, New Zealanders, Canadians, Indians, French, and Germans will attest. 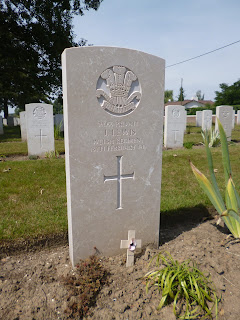 We came to the Le Tournet Monument in search of one particular grave. And that’s a thing in itself. Not all the men slaughtered in this place a hundred years ago were afforded such. The names on the monument, just 13,400 of them here, are all that there is to mark these men.

My relative on the other hand has a headstone, a beautiful piece of creamy marble, kept moss and lichen free by the commendable Commonwealth War Graves Commission.  On it, under the Prince of Wales feathers of the Welsh Regiment and above the simple cross are his name, J. Lewis, his rank – Private, his army number and the date he died, 13 February 1916.

What is missing is that he was John Lewis, my great, great uncle, and that he was only twenty when he was the target of a German sniper early on a Sunday morning in the bitterest month of winter. I remember my great grandmother telling me about her lovely brother when I was a small girl. We have photographs of him. We have a geology book he inscribed. 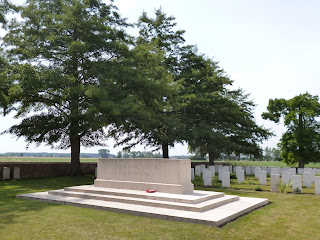 Here we are then, nearly one hundred years later, taking a pause in our busy lives, feeling rather goose bumpy, writing a message in the visitors book, taking pictures, and making a mental note of where he is. If you stand one meter to the left of the right hand pillar at the entrance to the monument and look towards the oak tree, his grave is directly in front of you in the fourth row in front of the tree, beside four other Welsh boys, all about the same age, all killed days apart.
Posted by Kate Noakes at 12:51