Will Self at Maison de la Poesie

Just every now and then Maison de la Poesie plays host to one of the greats and let me be clear here, I love Will Self, not in that teenage fancy-him-do-you way, no (she lied), but I think he is a clever and innovative writer. I enjoy his novels hugely and eagerly devour his journalism. As a cultural commentator he has something pithy to say on a number of topics that interest me, and he likes walking the urban space and psychogeography. How many more boxes can the man tick? Oh, yes and he has his wild side. Shame he's already spoken for.

Last night he was in Paris to launch his recent novel Umbrella, Parapluie to you, which was published this week in French. He gave a brilliant reading along with the French translation that was suitably animated. It was interesting to note the translation now that my French is so much better. I noticed a few words that I would have put quite differently for the colour and vivacity of Will's English to shine, but that it to pick nits.

The novel, in which he nods to weighty Modernist predecessors (Joyce, Woolf et al), is concerned with disease (a real pathology - remember Oliver Sacks and the film Awakening), technology innovated by war and the individual. Its cover quote from Joyce that 'a brother is as easily forgotten as an umbrella' is for Self the summation of the theme.  On the style, which has been criticised as hard, Will explained the use of the continuous present, the lack of breaks between the consciousness of one character and another and how he was pleased to have finally killed god, in the form the omniscient narrator. 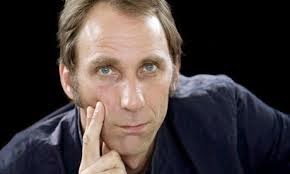 To an embarrassing question as to why he was in Paris as the novel was published years ago, I expected a vicious answer along the lines of not in French it wasn't, matey and it's my job to promote my book, you [expletive deleted], but Will was in gentle mood, kindly explaining the author's role in nurturing his book baby.

Questions I would have asked if I hadn't been so tired at the end of the week: Just how pissed off were you not to win the Booker Prize, and If narrative is no longer in the novel and has moved elsewhere, where is it in text art?

I'd like to suggest that narrative exists in poetry (I like to think I can write a whole novel in a narrative sense in one poem) and that we might see a resurgence of poetry in our sound bite age where text is reduced to tweets and flashes and our attention span is ever shorter for reading, especially novels.

Will characterised this situation by berating well educated people who can no longer be arsed (my word) to read or interact with high culture because a novel can't be clicked on to explain it meaning and who think this is an acceptable position. He was scathing about those who'd rather read children's books.

Sound bites to chew over:

Progress is the upgrading of the world every five years.

All is steampunk - obsolete technology is all around us such as an umbrella.

The serious novel is a philosophical form. It has to say something about existence.
Posted by Kate Noakes at 01:40