Henri Cartier-Bresson at the Pompidou

What do you deduce if, as a member of the Pompidou, you still have to wait in line to see the latest big show? Well, that the French like photography, naturellement, and that this a show worth seeing, bien sur. 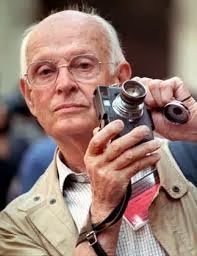 Henri Cartier-Bresson went everywhere and photographed everything in the twentieth century from the Spanish civil war - he was in the International Brigade, to the second world war - he was in the Communist Resistance, to Ghandi's funeral, to the 1968 uprising.

This exhibition is huge and showcases his entire oevre from experiments in Surrealism, to portraits of the great and the good - there's a wonderful one of Matisse and his pigeons.

There is so much to see and enjoy. Marvel at the technique and his brilliant composition. Watching footage of him photographing in the streets of Paris was an education in the speed at which he worked.  Some of my favourites were the homages to well known Impressionist paintings.

Two hours disappeared in a flash, if you'll pardon the pun. It's an tour de force. If a picture speaks a thousand words, then 500 say, well, you do the maths. Seriously, don't miss it. It's on until June. I will be back next time I have a visitor. Wait, that's this weekend.
Posted by Kate Noakes at 12:55