Into the Light with Sylvia Plath 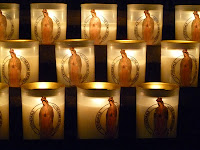 To shed some light on another of Sylvia Plath's poems in advance of my next Paris Lit Up Writing Workshop on 3 March in the library at Shakespeare and Company and set you a writing challenge, I'm going to take a close look at Sylvia Plath's 1962 poem By Candlelight. Ostensively a poem about waking in the night to tend to and feed a crying baby: 'Balled hedgehog./Small and cross', the poem has various points of light, to adopt a painterly term, before settling in praise of the particular candlestick as totem/guardian of the child. Let me elaborate.

Addressing the child ('small love'), the poem starts in a country night with a delightful image of it 'steeled with the sheen/Of what green stars can make it to our gate.' The stars are the first point of light and they are strange, being green. The next point of light is the mirror (a constant Plath object, as noted in my first two posts - scroll down for more), which floats mother and child 'at one candle power'. A mirror is the place where they meet each other. A candle third point) has a quasi-religious significance as a 'haloey radiance' and blows their shadows on the wall of the room making them 'violent giants'. Yet its light is barely there at all to start with as it is almost snuffed out.

The third and final stanza of the poem focuses on the candle : 'the light/ that keeps the sky at bay' and the bent man candlestick 'the little brassy Atlas' and its 'five brass cannonballs', which for the child represent protection, solidity and certainty in an insecure world :'to juggle with, my love, when the sky falls.' In this way, light banishes darkness in the poem, literally and metaphorically.

And now for the writing challenge: something wakes you in the night, what? focus on sounds in the dark inside and outside the house; then introduce one light source, then another, focus on how they effect you and what they do to the room; what happens next?; use the present tense and choose a title that doesn't have the words light or night in it. Enjoy and good luck!