Mirror Mirror on the Wall

Most readers spend a lot of time stating the obvious about this poem. Yes, it’s about a woman coming to terms with or not coming to terms with the inevitable process of ageing. But we don’t get to that until the last few lines and that wonderfully startling final image of her face rising ‘like a terrible fish’. 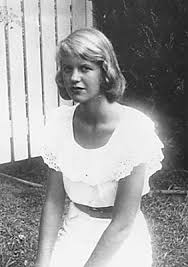 For now I am much more interested in who’s doing the talking[3]. The mirror not the woman is the ‘I’ of this poem and that’s interesting. In the first nine lines of this eighteen line poem i.e. half of it (the whole of the first stanza), it explains itself – silver, exact, without preconceptions, truthful – and how it exists ‘Most of the time I meditate on the opposite wall’. All of this, even it metaphorically turning into a lake, is before the woman appears. And the mirror carries on talking. Why? Why give voice to an inanimate object?

I suppose much of the answer lies in the project of poetry to say things in interesting, unusual and surprising ways. It would be a dull poem if all it was about was a woman looking in a mirror and saying to herself something like “oh dear I am getting old, as in old trout” (if you’ll pardon the pun and reductio ad absurdum). Plath finds another way of doing this and makes the exchange between woman and mirror something active as the mirror has a voice and personality and knows its importance to the woman, even if it mourns its position of neglect.

Granted it is not the knowing mirror of Snow White, but it does reflect faithfully and does not predict. It is not cruel and has no prejudices. It does not produce flattering light like the lying candle and moon, but it does have a sense of grandeur and power (‘a little god’). Nor is it passive as the exchange involves the mirror actively swallowing and drowning the younger woman and being rewarded by her tears and ‘agitation of hands’.

The technique of voicing allows Plath to think about the mirror-iness of mirrors, to explore what they are in essence, how they function and what they represent in our lives; a kind of meditation if you will. It’s a way of getting below the surface of things and thinking more deeply about them; a self-reflection.

You can try this for yourself and it’s an oft-used workshop exercise. Find an object of significance, it can be anything, and ask yourself what it wants to say, what’s its story, character, attitude, interaction with you? Now give it voice and write in the first person. It sounds bonkers, but actually it’s a lot of fun and if done really well, might even rival Plath’s great poem. Good Luck.


[1] Written 1961. Published in Crossing the Water, 1971.
[2] As the poem seems to be widely available everywhere on the internet, please search it out or better still buy a book with it in it as the poem itself is not reproduced in this article.
[3] There are lots of different critical approaches one might take with this poem from the feminist to the psycho-analytical, but they are not my focus here.
Posted by Kate Noakes at 23:32